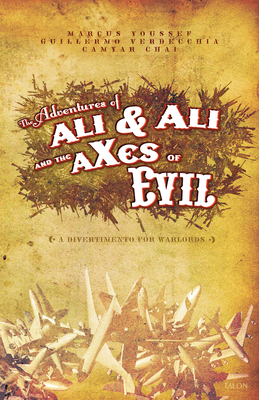 In this elaborate agitprop theatrical collaboration, the internal contradictions and duplicitous double-speak of the "war on terror" are exposed as the propaganda vehicles for the neo-colonialism of the West that they are. "Ali Hakim" and "Ali Ababwa," refugees from the imaginary country "Agraba," attempt to seduce their audience into providing them with food, refuge, security, freedom and the material benefits of Western consumer society, failing miserably at every step. A hard-hitting presentation of a play-within-a-play assaults the audience as Youssef, Verdecchia and Chai do Shakespeare, Shaw and Swift one better with an endless string of buffooneries and absurdities derived from an inversion of the clich's defining the geo-politics of the Middle East at the beginning of the 21st century. Informed by the research of Paul Krugman and Noam Chomsky, sent up by the post-modern cultural relativism of "Jean Paul Jacques Beauderri redada," this political satire is not for the faint of heart. Cast of 4 men.

Marcus YoussefWriter and performer Marcus Youssef is a regular contributor of drama, commentary and documentary to numerous programs on the CBC network. He also writes regularly for publications such as Vancouver Magazine, Georgia Straight, Rice Paper, and This Magazine. For many years, Youssef has also dedicated himself to numerous community-based advocacy programs that aim at using writing and/or theatre as a tool for procuring political and social change. Guillermo VerdecchiaGuillermo Verdecchia is a writer of drama, fiction, and film; a director, dramaturge, actor, and translator whose work has been seen and heard on stages, screens, and radios across the country and around the globe. He is a recipient of the Governor General's Award for Drama, a four-time winner of the Chalmers Canadian Play Award, a recipient of Dora and Jessie Awards, and sundry film festival awards for his film Crucero/Crossroads. Camyar ChaiCamyar Chai has worked in theatre and film for more than 20 years. He is the founder of Vancouver's acclaimed NeWorld Theatre. He has worked as a freelance actor, director, and writer as well as engaging in Arts Education. In addition to writing plays, Camyar has also written librettos for opera. An award-winning theatre maker, he received his Master of Fine Arts in Directing from the University of British Columbia.