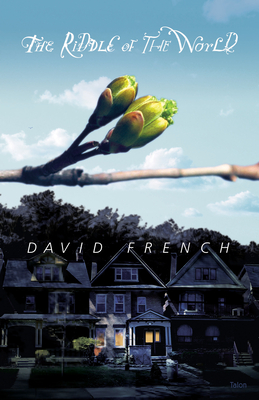 Published for the first time, David French's The Riddle of the World remains a classic of the Canadian stage.

Stockbroker Ron and ex-priest Steve are two new singles who get together to console themselves after having been abandoned by their mates. Through a comic series of false starts, disastrous one-night stands, dead-end blind dates and absurd attempts to reconnect with their former lovers, they are forced to come to terms with their fragile natures as men in a world with few signposts of male identity left standing. Initially blaming others for "taking their partners away," Ron fails repeatedly to see and come to terms with his overwhelming possessiveness; while Steve gradually learns to embrace his own new found and deeply sublimated gay sexuality. "The Riddle of the World," a fragment of a poem by Alexander Pope, resonates throughout this arch comedy of manners as it revisits the eternal struggle of the flesh and the spirit on the road to the characters' discovery of the true nature of love. Like all of Pope's characters, Ron and Steve are engaged in a mock battle with the social phantoms of their time, in a "sexual revolution" wherein every higher purpose is unmasked as a conceit of self-interest. Cast of three women and two men.

"[French] is one of Canda’s most acclaimed playwrights and an accomplished explorer of the power of memory."
Quill & Quire