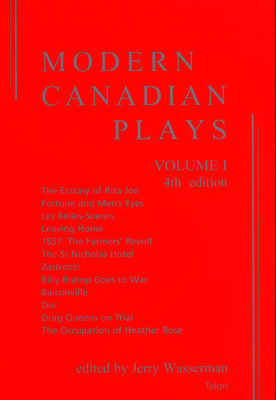 By Jerry Wasserman (Editor)
$39.95
Email or call for price

This is book number 1 in the Modern Canadian Plays series.

"I don't see how a play can be Canadian. I don't think there are any plays that you could call strictly Canadian ... What does that phrase mean?" Now, thirty-three years after Canadian directors spoke their minds, or rather shrugged their shoulders at the seeming hopelessness of de-colonizing Canadian theatre, this fourth edition of the "classic" Modern Canadian Plays sets out for us an even broader range of plays than previous editions, outlining a Canadian drama-scene that is far from colonial, inert, middle-class, or middle-aged. Spanning the years from 1967 to 1997, this anthology will likely continue to be the standard anthology for Canadian drama--and not without good reason. Edited by Jerry Wasserman--professor at the University of British Columbia, theatre critic for CBC, and one of Vancouver's most recurring (and memorable) faces on television-- Volume I still contains plays such as George Ryga's seminal and highly political The Ecstasy of Rita Joe (first performed in 1967, it was described as a "cicatrice" of Canadian society that "showed the bleeding flesh beneath"), as well as Michel Tremblay's Les Belles-Soeurs (one of the most critically acclaimed plays in Canada, translated from the original, controversial, joual). But more to the point, this edition of Volume I carries with it an even more distinct flavour of adventurousness in its juxtaposition of plays that are strikingly, even wildly, various--plays that can only be said to cohere around the difficulty of amorphous notions such as social justice, cultural belonging, and the existence of a collective past. The plays in this fourth edition of Modern Canadian Plays: Volume I date from 1967 to 1986.