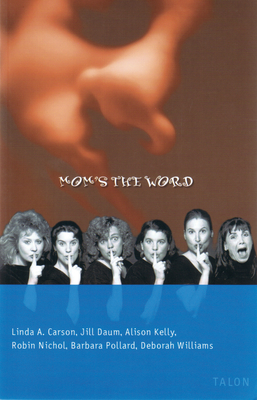 Mom's the Word was created out of a Saturday morning writers' support group. Getting together to share their experiences, six women performers struck upon the idea to write about what they were going through as mothers trying to maintain their careers, their individual identities and their relationships with their partners. The result is an evening of hilarious stories, bittersweet monologues, poetic reflections and revelatory anecdotes. Touching tales of giving birth to a premature baby are balanced against comic, ribald rants on diaper soup; whispered, hesitant conversations about sex after children; and the desperate confessionals of the over-stressed. All six moms have two children, display the keenly-honed emotional edge of the sleep-deprived and share among themselves (and with the audience) some of the most outrageous stories ever heard on the agony and ecstasy of motherhood--all of them true. In her introduction, Barbara Crook allows us to meet the participants in this extraordinary collaboration and chronicles the evolution of the play from life to art. Mom's the Word offers its audiences an emotional nakedness that is instantly recognizable as elemental. An evening with these Moms is one of those rare occasions where life, stripped to its essentials, does not imitate art, but lifts itself on its diaper-pins to become art. The result is one of the most popular shows ever to come out of the Vancouver theatre community. Originally presented at the 1994 Women in View Festival, Mom's the Word moved rapidly from smaller stages to a tour of Western Canada in 1996-1997; to Melbourne, Adelaide and Perth in 1998; to London in 1999; and is scheduled for performances in the USA, Israel and Spain in 2000.

"I’d almost forgotten what it’s like to enjoy a show this much."
Georgia Straight