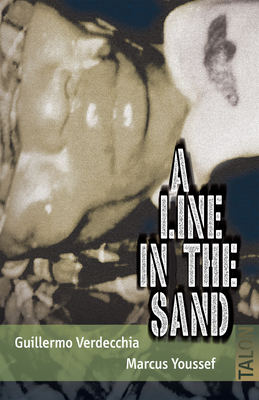 In the autumn of 1990, during Operation Desert Storm, two young men, one a troubled Canadian soldier, the other a teenage Palestinian black-marketeer, meet in the scorched Qatari desert. Breaching the divide of a profound cultural misunderstanding and against a backdrop of massive global conflict, these two become unlikely and secret friends. This tenuous friendship is severed by the torture and murder of the 16-year-old Palestinian inside the Canadian base--an act to which the Canadian soldier was at least a witness and perhaps a willing participant.

Weaving poetic drama with myriad documentary sources, A Line in the Sand rips the benevolent mask off recent western peacekeeping operations and challenges Canada's long treasured national mythology that it is a nation of quiet diplomats. It asks us to imagine how horrors like these could be perpetrated with our money, in our name and by people much like us. Cast of 3 to 5 men.

Guillermo VerdecchiaGuillermo Verdecchia is a writer of drama, fiction and film; a director, dramaturge, actor and translator whose work has been seen and heard on stages, screens, and radios across the country and around the globe. He is a recipient of the Governor General's Award for Drama, a four-time winner of the Chalmers Canadian Play Award, a recipient of Dora and Jessie Awards, and sundry film festival awards for his film Crucero/Crossroads. Marcus YoussefMany of Marcus's plays were written or created with friends and colleagues. They include Winners and Losers, Leftovers, Jabber, How Has My Love Affected You?, Ali and Ali and the aXes of Evil, Adrift, Peter Panties, and A Line in the Sand. These have been performed across North America, Australia, and Europe, and recently off-Broadway. Marcus's plays are also translated into multiple languages and published by Talonbooks and Playwrights Canada Press. Well-known in Vancouver as a cultural advocate, Marcus is artistic director of Neworld Theatre, co-founder of Progress Lab 1422, and chair of the city of Vancouver's Arts and Culture Policy Council.