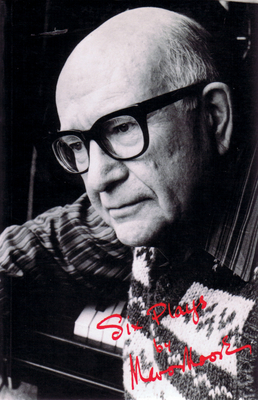 Here is a collection intended to showcase Mavor Moore's dramatic talent--these are theatre pieces stripped to the bare essentials of character sketches in quick, subtle lines; dramatic conflict, development and resolution with a minimum of props; and an emphasis on the performer's resources as an actor, rather than the externals of scene changes and stage contexts. This collection includes his latest two-act play The Apology, and five one-act plays: The Store, The Pile, Getting In, The Argument and Come Away, Come Away. These plays have all been performed in Canada, the United States and the United Kingdom.

Mavor MooreBorn in Toronto in 1919, dramatist, actor, director, composer, producer, critic and teacher, Mavor Moore wrote more than 100 works for stage, radio and television. He was CBC-TV's first chief producer, first chair of the Canadian Theatre Centre, founding director of the Charlottetown Festival and Toronto's St. Lawrence Centre for the Arts, and was the first artist to chair the Canada Council (1979-1983). Moore passed away in December 2006. A collection of his plays, Six Plays by Mavor Moore was published by Talonbooks in 1989.