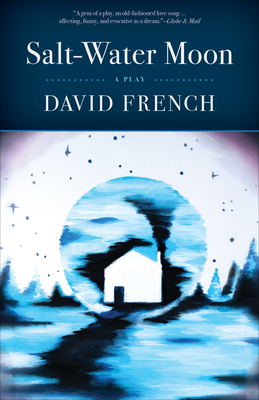 It's a splendid moon-filled night at Coley's Point in August, 1926. Eighteen-year-old Jacob Mercer has returned from Toronto to the tiny Newfoundland outport, hoping to win back his former sweetheart, Mary Snow. But Mary has become engaged to wealthy Jerome McKenzie, and she is still hurt and bewildered by Jacob's abrupt departure a year earlier. She will not be easily wooed. Cast of 1 woman and 1 man.

David FrenchBorn in Coley's Point, Newfoundland, David French was one of Canada's best-known and most critically acclaimed playwrights. His work received many major awards, and French was one of the first inductees into the Newfoundland Arts Hall of Honour. Among his best-loved works are the semi-autobiographical Mercer plays: Salt-Water Moon; 1949; Leaving Home, recently named one of Canada's 100 Most Influential Books (Literary Review of Canada) and one of the 1,000 Most Essential Plays in the English Language (Oxford Dictionary of Theatre); Of the Fields, Lately and Soldier's Heart. The Mercer plays have received hundreds of productions across North America, including a Broadway production of Of the Fields, Lately. This quintet of plays about a Newfoundland family has also touched audiences in Europe, South America and Australia. In addition, French produced skillful adaptations of Alexander Ostrovsky's The Forest, Anton Chekhov's The Seagull and August Strindberg's Miss Julie.