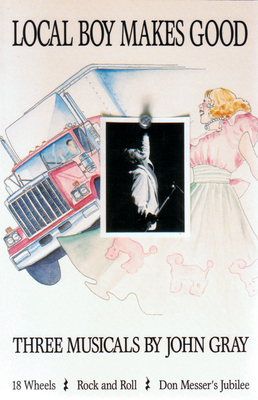 This book does more than collect three of John Gray's musical plays in one volume. In his preface to each play, and in his charming and wide-ranging introduction, Gray takes this opportunity to offer his readers some startling insights into the process by which his plays have come about; into his ongoing concern that his audiences not experience his musicals as "art," but as a way of recognizing something about their lives and the lives of those with whom they share their community, and into his own evolution as a playwright--how a boy from Truro, Nova Scotia, who got his start by failing music and playing in local bands named after fast American cars, stepped into the stage lights of Toronto, New York and London by daring to do something that everybody said wouldn't work.

John GrayJohn Gray is the author of a novel, many magazine articles and several stage musicals, a book on tatoos, Lost in North America: The Imaginary Canadian in the American Dream (1994), Local Boy Makes Good (1987) and the internationally acclaimed Billy Bishop Goes to War (1982) with Eric Peterson. He has contributed 65 satirical pieces for The Journal on CBC Television, and is a frequent speaker on cultural issues. Among his many awards are the Governor General's Award, the Canadian Authors Association Award and the National Magazine Award.