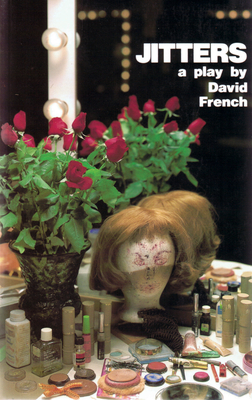 Jitters, David French's sophisticated backstage comedy, opens on the night of a preview of a new play, "The Care and Treatment of Roses." Within minutes, the audience is plunged into the world of the theatre, a world of instant loves and hates, easily bruised egos, contradictory interpretations of role and script--all complicated by crises involving faulty props, lost lines and bad reviews, and all magnified by the opening night "jitters" of cast, crew, writer and director. First performed in 1979, Jitters was an instant critical and commercial success. In just a few years, the play was produced in nearly every regional theatre in Canada and enjoyed several American performances as well; and the published edition, introduced by Talonbooks in 1980, has gone through many printings. The play has been substantially changed in the process of undergoing its more than one hundred productions, and appears here in its revised edition.

David FrenchBorn in Coley's Point, Newfoundland, David French was one of Canada's best-known and most critically acclaimed playwrights. His work received many major awards, and French was one of the first inductees into the Newfoundland Arts Hall of Honour. Among his best-loved works are the semi-autobiographical Mercer plays: Salt-Water Moon, 1949, Leaving Home, recently named one of Canada's 100 Most Influential Books (Literary Review of Canada) and one of the 1,000 Most Essential Plays in the English Language (Oxford Dictionary of Theatre), Of the Fields, Lately and Soldier's Heart. The Mercer plays have received hundreds of productions across North America, including a Broadway production of Of the Fields, Lately. This quintet of plays about a Newfoundland family has also touched audiences in Europe, South America and Australia. In addition, French produced skillful adaptations of Alexander Ostrovsky's The Forest, Anton Chekhov's The Seagull and August Strindberg's Miss Julie.