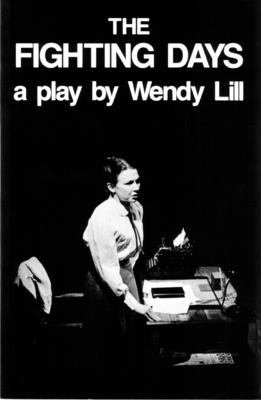 The Fighting Days is set in Winnipeg during 1910-1917. The play focuses on the life and work of Francis Marion Beynon, a Manitoba journalist and political activist. When the play opens, Francis is on her way to Winnipeg, leaving behind a sheltered and religious rural childhood. Soon after she arrives she meets Nellie McClung and becomes involved in the Votes-for-Women movement. She also begins work as the women's page editor for The Rural Review, airing her controversial political views on the editorial page. Suddenly, Canada is involved in World War I, and the conscription crisis divides the suffragists: should all women have the vote or just Dominion-born women who are sending their husbands and sons off to battle? Should women use their votes to push for conscription or to lobby for a swift end to the war? A play about the polarities of public and private lives, and about issues of racism and pacifism within the women's movement, The Fighting Days deals with timeless moral concerns. Francis Beynon, says the playwright, "gave up everything for her beliefs and one can only hope the world's a better place for it.

Wendy LillWendy Lill has not only written extensively for radio, magazines, film, television and the stage, but has also been active in national politics. In 1979, while with CBC Radio in Winnipeg, Lill wrote her first play, On the Line, to dramatize the plight of striking Winnipeg garment industry workers. Since then, her plays have gone on to examine the Canadian women's suffrage movement (The Fighting Days); aboriginal-white relations (The Occupation of Heather Rose, Sisters); pedophilia and mass hysteria (All Fall Down); the slashing of social programs (Corker); and the dangerous lives of coal miners in her adopted province of Nova Scotia (The Glace Bay Miners' Museum).