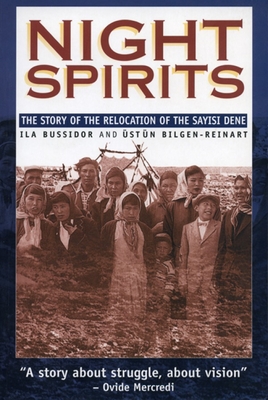 For over 1500 years, the Sayisi Dene, ‘The Dene from the East’, led an independent life, following the caribou herds and having little contact with white society. In 1956, an arbitrary government decision to relocate them catapulted the Sayisi Dene into the 20th century. It replaced their traditional nomadic life of hunting and fishing with a slum settlement on the outskirts of Churchill, Manitoba. Inadequately housed, without jobs, unfamiliar with the language or the culture, their independence and self-determination deteriorated into a tragic cycle of discrimination, poverty, alcoholism and violent death.     By the early 1970s, the band realized they had to take their future into their own hands again. After searching for a suitable location, they set up a new community at Tadoule Lake, 250 miles north of Churchill. Today they run their own health, education and community programs. But the scars of the relocation will take years to heal, and Tadoule Lake is grappling with the problems of a people whose ties to the land, and to one another, have been tragically severed.     In Night Spirits, the survivors, including those who were children at the time of the move, as well as the few remaining elders, recount their stories. They offer a stark and brutally honest account of the near-destruction of the Sayisi Dene, and their struggle to reclaim their lives. It is a dark story, told in hope.

Ila Bussidor was born in 1955, a year before the relocation. She lived in Churchill until moving to Tadoule Lake in 1973, and is a former Chief of the Fort Churchill Sayisi Dene Band.

Ustun Bilgen-Reinart is a freelance writer, journalist and broadcaster with a special interest in Aboriginal and development issues. She has produced numerous documentaries for CBC radio and television programs, including Morningside, Ideas and The Journal.