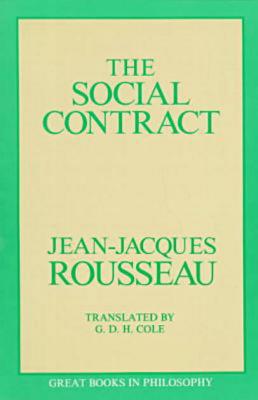 By Jean-Jacques Rousseau
for information about purchasing this book, please contact orders@bookpassage.com

With the publication of The Social Contract in 1761, Jean-Jacques Rousseau took his place among the leading political philosophers of the Enlightenment. Like his contractarian predecessors (Thomas Hobbes and John Locke), Rousseau sought to ground his political theory in an understanding of human nature, which he believed to be basically good but corrupted by the conflicting interests within society. Here self-interest degenerated into a state of war from which humanity could only be extricated by the imposition of a contract. As a party to the compact, each individual would find his true interest served within the political expression of the community of man, or the "general will."

What is the content of human nature and how does it compel mankind to come together to create a civil society? What form does this society take? What benefits does it offer its citizens, and what must each individual sacrifice to reap its rewards? How does sovereign power manifest itself, and what consequences follow for those who choose not to abide by the "general will"? Does Rousseau's political theory set forth a blueprint for democracy -- one that results in equality, universal suffrage, and popular sovereignty -- or is it a recipe for central state totalitarianism? These are just a few of the complex questions that will confront readers of The Social Contract.

Whatever their intent or ultimate result, Jean-Jacques Rousseau's views on the state and man's relationship to it have culminated in one of the most powerful and compelling pieces of political philosophy ever written.

JEAN-JACQUES ROUSSEAU was born in Geneva on June 28, 1712, and raised by his father after his mother died giving him life. The reproachment Rousseau experienced at his father's hand produced feelings of guilt and inferiority that were to haunt him throughout his life. During his youth, Rousseau wandered throughout Europe from job to job. Having moved to Paris from the city of Lyon in 1742, Rousseau sought the intellectual life and soon became associated with Denis Diderot and the philosophes.

Rousseau's literary career began with his entry in an essay contest in 1749 on the subject of the relationship of science and the arts to morals. His winning essay, Discourses on Sciences and the Arts, soon became the foundation for his later work entitled the Discourse on the Origin of Inequality (1753). With its publication, he became a figure of some controversy in France. Ideological differences between his views and those of his Enlightenment contemporaries soon surfaced, and Rousseau once again found himself alienated from the intellectual establishment.

His differences with the philosophes proved to be the impetus for Rousseau's future work on the content of human nature and man's rela­tionship to society and the state. Contrary to the individualism and intel­lectual enlightenment advocated by his contemporaries, Rousseau sought to sublimate individuality in the security of the collective per­sonality known as the general will. This new society would be typified by concern for the community and would be ruled by laws developed through a plan of controlled participation. Rousseau's social theory was developed in his work Julie, ou la Nouvelle Heloise (1761) and in Emile (1762). The institutional structure was constructed in The Social Con­tract (1761).

In Emile, Rousseau presents his utopian vision of child-centered education, full of the sentiments of Romanticism, a movement that Rousseau inspired.

Rousseau's later years were spent fighting off persecution, both real and imaginary. He died near Paris on July 2, 1778.