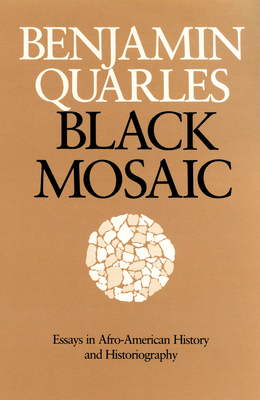 By Benjamin Quarles, August Meier (Introduction by)
$26.95
Email or call for price

From the introduction to this volume:

It has been nearly half a century since Benjamin Quarles published his first scholarly article in the field of Afro-American history. With the appearance of his biography of Frederick Douglass in 1948, Quarles became a major contributor to the history of the black experience from the Revolutionary War through the Civil War. His leading works include the standard volumes on the role of Negroes in both of those conflicts, pioneering studies on black participation in the abolitionist movement, and two monographs on the interrelation between blacks and major white antislavery figures. Given the collective importance of this corpus of work, including the essays reprinted herein, we are all greatly in his debt.

Quarles served as a model to a whole generation of scholars in Afro-American history, white and black alike. His syntheses of Civil War and abolition, his authoritative book and articles on the Revolution, his sensitive analysis of Lincoln and the blacks are all works that remain unequaled or unsurpassed. Even his pioneering Frederick Douglass remains a solid and highly respected monograph. The present and the next generation of historians are, and will be, writing from a later perspective and addressing themselves to different questions, but Quarles's works not only plowed new ground; they will live as standard treatments of topics for years to come.

Benjamin Quarles was professor of history at Morgan State University. His books include Frederick Douglass; The Negro in the American Revolution; The Negro in the Making of America; The Negro in the Civil War; Lincoln and the Negro; and Black Abolitionists. The American Historical Association has honored him with its Award for Scholarly Distinction, given to "senior historians of the highest distinction in our profession."

"Informative, refreshing, and a delight to read. . . . This is vintage Quarles, which means that it is Quarles at his very best."—John Hope Franklin

"Black Mosaic immediately impresses historians with its dispassionate, objective historical writing, each essay uncannily appropriate for the time in which it was published."—Journal of American History

"No one has contributed more to the field of Afro-American history than Benjamin Quarles. . . . The present volume reprints twelve of Quarles's important essays grouped under categories: 'Blacks in Abolition and Civil War,' 'Blacks in the Twentieth Century,' and 'Black History.' Everyone in the field will appreciate the bringing together of these essays that have so well stood the test of time."—Journal of Southern History

"[This book] represents Quarles's lifetime of careful research into the black experience. . . . A restorative function forms the central theme of Quarles's work: his effort to place blacks--through biography and collectively--at the center of America's national story."—Reviews in American History