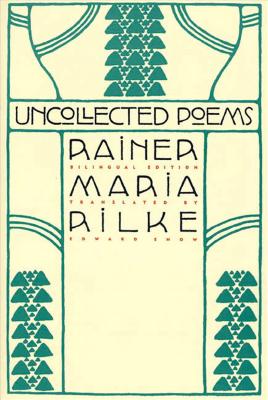 Between the New Poems of 1907 and 1908 and his death in 1926, Rainer Maria Rilke published only two major volumes of poetry--the Duino Elegies and the Sonnets to Orpheus, both in 1923. But during this period he was writing verse continually, often prolifically--in letters, in guest books, in presentation copies, and chiefly in the pocket-books he always carried with him. This body of uncollected work exceeds five hundred pieces: finished poems of great poise and brilliance, headlong statements that hurtle through their subjects, haunting "fragments," and short bursts that arc into the unpursuable. A remarkable number of them are among Rilke's finest poems.

Snow's selection of more than a hundred of these little-known works distills the best of the uncollected poetry while offering a wide enough choice to convey Rilke's variety and industry during the years he wrote them. Uncollected Poems will lead students, scholars, and other readers to a fresh--and more accurate--understanding of this great poet's life and work.

Rainer Maria Rilke was born in Prague in 1875 and traveled throughout Europe for much of his adult life, returning frequently to Paris. There he came under the influence of the sculptor Auguste Rodin and produced much of his finest verse, most notably the two volumes of New Poems as well as the great modernist novel The Notebooks of Malte Laurids Brigge. Among his other books of poems are The Book of Images and The Book of Hours. He lived the last years of his life in Switzerland, where he completed his two poetic masterworks, the Duino Elegies and Sonnets to Orpheus. He died of leukemia in December 1926.

Edward Snow is a professor of English at Rice University. He is the recipient of an Academy of Arts and Letters Award for his Rainer Maria Rilke translations and has twice received the Academy of American Poets' Harold Morton Landon Translation Award. He is the author of A Study of Vermeer and Inside Bruegel.

“[This] translation of Rilke's neglected later poems is worthy of Snow's [earlier] versions of the two books of New Poems. Something of the non-vatic Rilke, poet of perception and sensation, is best conveyed in English by Snow's meditations.” —Harold Bloom

“The Snow translation of these little-known Rilke poems is brilliant. Just turn to 'The Spanish Trilogy.' It is quite simply one of [the twentieth] century's most beautiful poems--in German and in English.” —Mark Strand