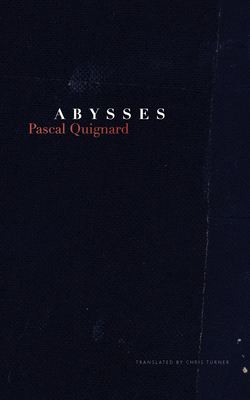 By Pascal Quignard, Chris Turner (Translated by)
for information about purchasing this book, please contact orders@bookpassage.com

Prolific essayist, translator, and critic Pascal Quignard has described his Last Kingdom series as something unique. It consists, he says, “neither of philosophical argumentation, nor short learned essays, nor novelistic narration,” but comes, rather, from a phase of his work in which the very concept of genre has been allowed to fall away, leaving an entirely modern, secular, and abnormal vision of the world.

In Abysses, the newest addition to the series, Quignard brings us yet more of his troubling, questing characters—souls who are fascinated by what preceded and conceived them. He writes with a rich mix of anecdote and reflection, aphorism and quotation, offering enigmatic glimpses of the present, and confident, pointed borrowings from the past. But when he raids the murkier corners of the human record, he does so not as a historian but as an antiquarian. Quignard is most interested in the pursuit of those stories that repeat and echo across the seasons in their timelessness.

Pascal Quignard is the author of more than sixty titles and is widely regarded as one of the foremost literary French writers today. In 2002, he won France’s most prestigious literary prize, the Prix Goncourt, with The Roving Shadows, the first work of nonfiction to win the prize.

Chris Turner is a translator and writer living in Birmingham, UK. He has translated numerous books from French and German, including, for Seagull Books, titles by Jean-Paul Sartre, Roland Barthes, André Gorz, Yves Bonnefoy, and Pascal Quignard, among others.