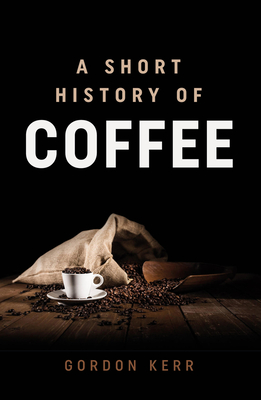 Having conquered the world's taste buds and established itself as a staple in our daily lives, coffee has mirrored the moods and movements of society for centuries—yet, how much do we know about its history?

In his riveting new book, A Short History of Coffee, Gordon Kerr investigates the fascinating history behind the global obsession with coffee, from its Ethiopian origins, the legends, myths, geographical locations and somewhat eccentric characters that have helped make it the staple that it is today.

Proliferating in high streets, towns and cities across Europe, coffee has become increasingly popular in recent years, and has succeeded in creating new and exciting hubs of commerce, news and debate, where deals could be done and revolution could be incited. Yet, despite coffee's very modern role, its origins stretch back to the days of intrepid travelers and merchants, who told tales of this new and exotic beverage that uplifted and enlivened the drinker.

Following the growth in popularity through to the 21st century explosion of coffee shop culture, A Short History of Coffee lifts the Styrofoam lid on both the business of coffee, as well as the pleasures that it brings its drinkers. Gordon Kerr masterfully balances an exploration of the history of this iconic beverage, whilst also delving into the frothy brew of business, politics, and money that accompanies it.