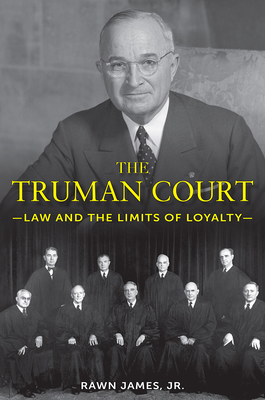 Perhaps the most overlooked aspect of Harry S. Truman’s presidency is his judicial legacy, with even the finest of Truman biographies neglecting to consider the influence he had on the Supreme Court. Yet, as Rawn James lays out in engaging detail, president Harry Truman successfully molded the high court into a judicial body that appeared to actively support his administration’s political agenda. In rulings that sparked controversy in their own time, the Supreme Court repeatedly upheld Truman’s most contentious policies, including actions to restrict free speech, expand civil rights, and manage labor union unrest.

The Truman Court: Law and the Limits of Loyalty argues that the years between FDR’s death in 1945 and Chief Justice Earl Warren’s confirmation in 1953—the dawn of the Cold War—were, contrary to widespread belief, important years in Supreme Court history. Never before or since has a president so quickly and completely changed the ideological and temperamental composition of the Court. With remarkable swiftness and certainty, Truman constructed a Court on which he relied to lend constitutional credence to his political agenda.

Rawn James, Jr. has practiced law in Washington, D.C. for 20 years.  His previous books are Root and Branch: Charles Hamilton Houston, Thurgood Marshall and the Struggle to End Segregation and The Double V: How Wars, Protest and Harry Truman Desegregated America's Military.

“Well written and engaging.”—Kari Frederickson, University of Alabama, author of Cold War Dixie: Militarization and Modernization in the American South

“In this deeply researched, skillfully rendered, and sharply revisionist monograph, Rawn James Jr. argues persuasively that President Harry S. Truman ‘revolutionized the relationship between the president and the supreme court.’ Relying on his close personal and political ties to Chief Justice Fred Vinson and the other three justices appointed during his presidency, Truman turned the court into an indispensable ally in his struggles to influence public policy on numerous matters of national importance. This is an important book that will transform our understanding of both the Truman presidency and the modern supreme court.”—Raymond Arsenault, author of Freedom Riders: 1961 and the Struggle for Racial Justice and Arthur Ashe, A Life


“Nicely written, sprinkled with interesting quotes, and astutely researched, Rawn James’ new work fills a void in Truman scholarship. This is, however, more than a book about the Truman Court, for during the era the Supreme Court justices were involved in all the issues of the day—the cold war, housing rights, civil liberties, racial justice, and presidential powers and the Steel Seizure Case. James has produced a thoughtful and stimulating read.”—Terry H. Anderson, Texas A&M University, author of The United States, Great Britain, and the Cold War, 1944-47 and The Sixties


"Of special and timely interest given today's political climate and calls from some quarters for expanding the number of Supreme Court justices, 'The Truman Court: Law and the Limits of Loyalty' is an especially and unreservedly recommended addition to community, college, and university library American judicial history collections and supplemental studies curriculums."—Midwest Book Review