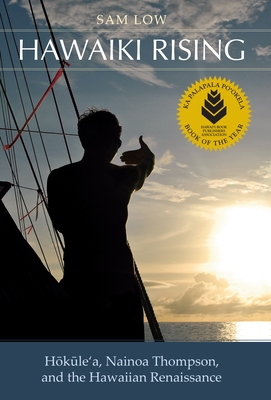 Attuned to a world of natural signs--the stars, the winds, the curl of ocean swells--Polynesian explorers navigated for thousands of miles without charts or instruments. They sailed against prevailing winds and currents aboard powerful double canoes to settle the vast Pacific Ocean. And they did this when Greek mariners still hugged the coast of an inland sea, and Europe was populated by stone-age farmers. Yet by the turn of the twentieth century, this story had been lost and Polynesians had become an oppressed minority in their own land. Then, in 1975, a replica of an ancient Hawaiian canoe--Hōkūle'a--was launched to sail the ancient star paths, and help Hawaiians reclaim pride in the accomplishments of their ancestors.

Hawaiki Rising tells this story in the words of the men and women who created and sailed aboard Hōkūle'a. They speak of growing up at a time when their Hawaiian culture was in danger of extinction; of their vision of sailing ancestral sea-routes; and of the heartbreaking loss of Eddie Aikau in a courageous effort to save his crewmates when Hōkūle'a capsized in a raging storm. We join a young Hawaiian, Nainoa Thompson, as he rediscovers the ancient star signs that guided his ancestors, navigates Hōkūle'a to Tahiti, and becomes the first Hawaiian to find distant landfall without charts or instruments in a thousand years. Hawaiki Rising is the saga of an astonishing revival of indigenous culture by voyagers who took hold of the old story and sailed deep into their ancestral past.

Sam Low served in the U.S. Navy in the Pacific from 1964 to 1966 and earned a PhD in anthropology from Harvard in 1975. He produced the award-winning film, The Navigators: Pathfinders of the Pacific, and is the author of many articles on the canoe, and her meaning to Polynesians. He has sailed aboard Hōkūle'a on three voyages, from 1999 to 2007.