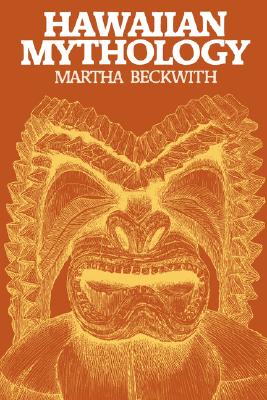 Ku and Hina--man and woman--were the great ancestral gods of heaven and earth for the ancient Hawaiians. They were life's fruitfulness and all the generations of mankind, both those who are to come and those already born.

The Hawaiian gods were like great chiefs from far lands who visited among the people, entering their daily lives sometimes as humans or animals, sometimes taking residence in a stone or wooden idol. As years passed, the families of gods grew and included the trickster Maui, who snared the sun, and fiery Pele of the volcano. Ancient Hawaiians lived by the animistic philosophy that assigned living souls to animals, trees, stones, stars, and clouds, as well as to humans. Religion and mythology were interwoven in Hawaiian culture; and local legends and genealogies were preserved in song, chant, and narrative. Martha Beckwith was the first scholar to chart a path through the hundreds of books, articles, and little-known manuscripts that recorded the oral narratives of the Hawaiian people. Her book has become a classic work of folklore and ethnology, and the definitive treatment of Hawaiian mythology. With an introduction by Katherine Luomala.