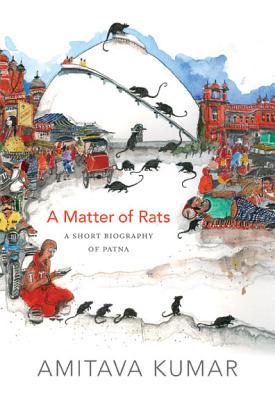 It is not only the past that lies in ruins in Patna, it is also the present. But that is not the only truth about the city that Amitava Kumar explores in this vivid, entertaining account of his hometown. We accompany him through many Patnas, the myriad cities locked within the city--the shabby reality of the present-day capital of Bihar; Pataliputra, the storied city of emperors; the dreamlike embodiment of the city in the minds and hearts of those who have escaped contemporary Patna's confines. Full of fascinating observations and impressions, A Matter of Rats reveals a challenging and enduring city that exerts a lasting pull on all those who drift into its orbit. Kumar's ruminations on one of the world's oldest cities, the capital of India's poorest province, are also a meditation on how to write about place. His memory is partial. All he has going for him is his attentiveness. He carefully observes everything that surrounds him in Patna: rats and poets, artists and politicians, a girl's picture in a historian's study, and a sheet of paper on his mother's desk. The result is this unique book, as cutting as it is honest.

Amitava Kumar is a novelist, poet, journalist, filmmaker, and Helen D. Lockwood Professor of English at Vassar College. He is the author of A Foreigner Carrying in the Crook of His Arm a Tiny Bomb and Nobody Does the Right Thing: A Novel, both also published by Duke University Press; Husband of a Fanatic: A Personal Journey through India, Pakistan, Love, and Hate, a New York Times "Editors' Choice" selection; Bombay--London--New York, a New Statesman (UK) "Book of the Year" selection; and Passport Photos. He is the editor of several books, including Away: The Indian Writer as an Expatriate, The Humour and the Pity: Essays on V. S. Naipaul, and World Bank Literature. He is also the screenwriter and narrator of the prize-winning documentary film Pure Chutney. Kumar's writing has appeared in The Nation, Harper's Magazine, Vanity Fair, The American Prospect, The Chronicle of Higher Education, The Hindu, and other publications in North America and India.