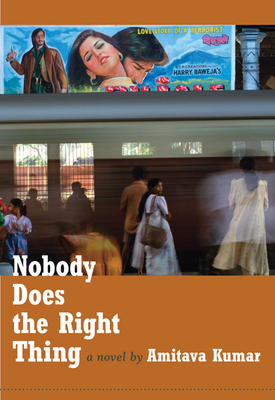 A young poet is killed by her lover, a politician, in the eastern Indian state of Bihar. Soon afterward, across India in Bombay, an idealistic journalist is hired by a movie director to write a Bollywood screenplay about the murdered poet. Research for the script takes the writer, Binod, back to Bihar, where he and his cousin Rabinder were raised. While the high-minded Binod struggles to turn the poet's murder into a steamy tale about small towns, desire, and intrigue, Rabinder sits in a Bihari jail cell, having been arrested for distributing pornography through a cybercaf . Rabinder dreams of a career in Bollywood filmmaking, and, unlike his cousin, he is not burdened by ethical scruples. Nobody Does the Right Thing is the story of these two cousins and the ways that their lives unexpectedly intertwine. Set in the rural villages of Bihar and the metropolises of Bombay and Delhi, the novel is packed with telling details and anecdotes about life in contemporary India. At the same time, it is a fictional investigation into how narratives circulate and vie for supremacy through gossip, cinema, popular fiction, sensational journalism, and the global media.

Amitava Kumar is a novelist, poet, journalist, and Professor of English at Vassar College. He is the author of Husband of a Fanatic, a New York Times "Editors' Choice"; Bombay-London-New York, a New Statesman (UK) "Book of the Year"; and Passport Photos. He is the editor of several books, including Away: The Indian Writer as an Expatriate, The Humour and the Pity: Essays on V. S. Naipaul, and World Bank Literature. He is also an editor of the online journal Politics and Culture and the screenwriter and narrator of the prize-winning documentary film Pure Chutney. Kumar's writing has appeared in the Nation, Harper's, Vanity Fair, American Prospect, the Chronicle of Higher Education, the Hindu, and other publications in North America and India.