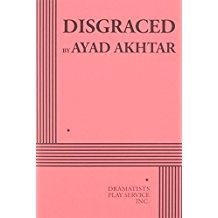 By Ayad Akhtar
$9.95
Email or call for price

Winner of the 2013 Pulitzer Prize.

Amir Kapoor is a successful Pakistani-American lawyer who is rapidly moving up the corporate ladder while distancing himself from his cultural roots. Emily, his wife, is white; she's an artist, and her work is influenced by Islamic imagery. When the couple hosts a dinner party, what starts out as a friendly conversation escalates into something far more damaging.

"…a continuously engaging, vitally engaged play about thorny questions of identity and religion in the contemporary world, with an accent on the incendiary topic of how radical Islam and the terrorism it inspires have affected the public discourse. In dialogue that bristles with wit and intelligence, Mr. Akhtar…puts contemporary attitudes toward religion under a microscope, revealing how tenuous self-image can be for people born into one way of being who have embraced another…Mr. Akhtar's cut-crystal dialogue is so stimulating. Everyone has been told that politics and religion are two subjects that should be off limits at social gatherings. But watching Mr. Akhtar's characters rip into these forbidden topics, there's no arguing that they make for ear-tickling good theater." —NY Times.

"…blistering social drama about the racial prejudices that secretly persist in progressive cultural circles…Akhtar knows how to build a scene and maintain suspense, so there's a sense of inevitability about the damage that's done over the course of the evening. But because of the artful construction, it still comes as a shock when the two couples go into attack mode." —Variety.

"What makes DISGRACED impressive is that Akhtar, having invented four educated, intelligent adult characters, lets the burgeoning mess articulate itself through their interaction…you rarely feel the playwright nudging them in the right direction." —Village Voice.