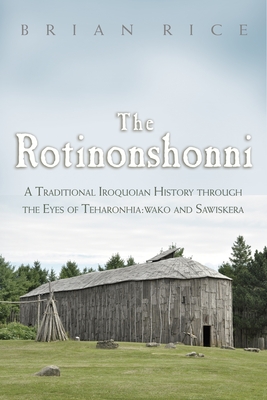 In this book, Rice offers a comprehensive history based on the oral traditions of the Rotinonshonni Longhouse People, also known as the Iroquois. As a participant in a nearly 700-mile walk following the story of the Peacemaker, who confederated the original five warring nations that became the Rotinonshonni, Rice traces the historic sites located in what are now known as the Mississippi River Valley, Upstate New York, southern Quebec, and Ontario.

He draws upon a wide variety of sources including J. N. B. Hewitt's translation of the creation story; the oral presentations of Cayuga Elder Jacob Thomas; oral traditions written down by William Beauchamp and William Fenton; the Code of Handsome Lake in Lewis Henry Morgan's League of the Iroquois; and other sources where oral traditions were recorded. In doing so, Rice chronicles the Iroquois creation story, the origin of Iroquois clans, the Great Law of Peace, the European invasion, and the life of Handsome Lake. The Rotinonshonni creates from oral traditions a history that informs the reader about events that happened in the past and how those events have shaped and are still shaping Rotinonshonni society today.

Brian Rice (Natoway) is associate professor in the Department of Education at the University of Winnipeg and adjunct professor in the Arthur V. Mauro Centre for Peace and Justice at the University of Manitoba. A Mohawk scholar, Rice received his doctorate from the Native Traditional Knowledge Program at the California Institute of Integral Studies