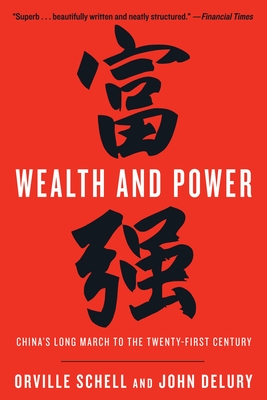 Through a series of lively and absorbing portraits of iconic modern Chinese leaders and thinkers, two of today’s foremost specialists on China provide a panoramic narrative of this country’s rise to preeminence that is at once analytical and personal. How did a nation, after a long and painful period of dynastic decline, intellectual upheaval, foreign occupation, civil war, and revolution, manage to burst forth onto the world stage with such an impressive run of hyperdevelopment and wealth creation—culminating in the extraordinary dynamism of China today?

Wealth and Power answers this question by examining the lives of eleven influential officials, writers, activists, and leaders whose contributions helped create modern China. This fascinating survey begins in the lead-up to the first Opium War with Wei Yuan, the nineteenth-century scholar and reformer who was one of the first to urge China to borrow ideas from the West. It concludes in our time with human-rights advocate and Nobel Peace Prize laureate Liu Xiaobo, an outspoken opponent of single-party rule. Along the way, we meet such titans of Chinese history as the Empress Dowager Cixi, public intellectuals Feng Guifen, Liang Qichao, and Chen Duxiu, Nationalist stalwarts Sun Yat-sen and Chiang Kai-shek, and Communist Party leaders Mao Zedong, Deng Xiaoping, and Zhu Rongji.

The common goal that unites all of these disparate figures is their determined pursuit of fuqiang, “wealth and power.” This abiding quest for a restoration of national greatness in the face of a “century of humiliation” at the hands of the Great Powers came to define the modern Chinese character. It’s what drove both Mao and Deng to embark on root-and-branch transformations of Chinese society, first by means of Marxism-Leninism, then by authoritarian capitalism. And this determined quest remains the key to understanding many of China’s actions today.

By unwrapping the intellectual antecedents of today’s resurgent China, Orville Schell and John Delury supply much-needed insight into the country’s tortured progression from nineteenth-century decline to twenty-first-century boom. By looking backward into the past to understand forces at work for hundreds of years, they help us understand China today and the future that this singular country is helping shape for all of us.

NAMED ONE OF THE BEST BOOKS OF THE YEAR BY ST. LOUIS POST-DISPATCH

“Informative and insightful . . . a must-read for anyone with an interest in the world’s fastest-rising superpower.”—Slate

“It does a better job than most other books of answering a basic question the rest of the world naturally asks about China’s recent rise: What does China want?”—The Atlantic

“The portraits are beautifully written and bring to life not only their subjects but also the mood and intellectual debates of the times in which they lived.”—Foreign Affairs

Orville Schell was educated at Harvard University and the University of California, Berkeley and is the author of numerous books and articles on China. The former dean of the Graduate School of Journalism at Berkeley, he is presently the Arthur Ross Director of the Center on U.S.-China Relations at the Asia Society in New York City.

John Delury received his Ph.D. in modern Chinese history at Yale University, where he wrote his dissertation on the Ming-Qing Confucian scholar Gu Yanwu. He taught at Brown, Columbia, and Peking University, and was associate director of Asia Society’s Center on U.S.-China Relations. He is currently an assistant professor of East Asian studies at Yonsei University in Seoul.

“Informative and insightful . . . a must-read for anyone with an interest in the world’s fastest-rising superpower.”—Slate

“It does a better job than most other books of answering a basic question the rest of the world naturally asks about China’s recent rise: What does China want?”—The Atlantic

“The portraits are beautifully written and bring to life not only their subjects but also the mood and intellectual debates of the times in which they lived.”—Foreign Affairs

“I know there are lots of China history books these days, but this one is really well done. It tells the story with lots of interesting historical characters and deep insights into the country. Really worth reading.”—Fareed Zakaria (Book of the Week)

“In a provocative new book whose ideas have already begun stirring debate among China watchers, Orville Schell and John Delury argue that the quest for national rejuvenation, or for wealth and power, has long been at the heart of modern Chinese political and intellectual thought.”—The New York Times

“I highly recommend Wealth and Power: China’s Long March to the Twenty-first Century, an excellent new book from Orville Schell and John Delury. The book goes a long way to explaining what drives the current leadership, and why betting against their resolve to reform may be risky in the medium to long term.”—Bill Bishop, The New York Times

“Wealth and Power offers everything readers might expect from its two eminent authors. It is both sweeping and specific, authoritative and lively, sympathetic and critical, offering the perspective of both the hedgehog and the fox. The hardest challenge in writing about China, or finding things to read about it, is perceiving significant patterns while remaining aware of the chaos and contradictions. Orville Schell and John Delury meet that challenge in exemplary form. I only wish that they'd written the book years ago, so that (along with other readers) I could have been taking advantage of its insights all along.”—James Fallows, national correspondent, The Atlantic

“Orville Schell and John Delury have delivered a brilliantly original and essential book: the road map to China’s quest for national salvation. This is a story of ideas and the vibrant figures who shaped them: rebels, thinkers, and rivals, united by the quest for reinvention. It is required reading for anyone seeking to understand China’s motives and the future of global competition, and is, quite simply, a pleasure to read. Vivid, literate, and brimming with insights, Wealth and Power deserves to become a classic.”—Evan Osnos, China correspondent, The New Yorker

“In Wealth and Power, their crisp and comprehensive introduction to the history of modern China, historians Orville Schell and John Delury present us with the historical background we need to understand the driving mechanism that lies at the center of China today. By no longer presenting China’s past two centuries as a record of recurrent failures and humiliations, they give us a portrait of a nation in the making, and of leaders with the skills and determination to redirect China’s energies on a global scale. The change of perspective is valuable and challenging.”—Jonathan D. Spence, author of The Search for Modern China