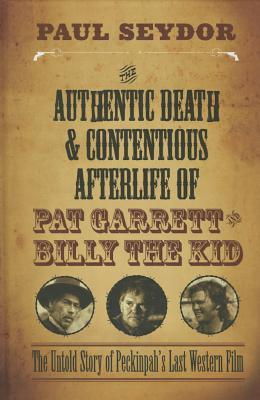 Long before Sam Peckinpah finished shooting his 1973 Western, Pat Garrett and Billy the Kid, there was open warfare between him and the studio. In this scrupulously researched new book Paul Seydor reconstructs the riveting history of a brilliant director fighting to preserve an artistic vision while wrestling with his own self‑destructive demons. Meticulously comparing the film five extant versions, Seydor documents why none is definitive, including the 2005 Special Edition, for which he served as consultant. Viewing Peckinpah’s last Western from a variety of fresh perspectives, Seydor establishes a nearly direct line from the book Garrett wrote after he killed Billy the Kid to Peckinpah’s film ninety-one years later and shows how, even with directors as singular as this one, filmmaking is a collaborative medium. Art, business, history, genius, and ego all collide in this story of a great director navigating the treacherous waters of collaboration, compromise, and commerce to create a flawed but enduringly powerful masterpiece.

Paul Seydor is an Oscar-nominated film editor and a professor in Dodge College of Film and Media Arts at Chapman University in California. He is the author of Peckinpah: The Western Films—A Reconsideration (1997).

“This exceptional and engrossing book explores the genesis of a particular film while describing the turmoil in film production that we like to call “collaboration.” I cannot call to mind another book that is so illuminating on the great variety of pressures on a film idea that begins in the writing and the shooting, but may climax in the internecine warfare that carries the footage to the screen. In addition, we get a rich portrait--as good as has been achieved--of Peckinpah, the unruly genius who made many enemies but reserved first place on that team for himself.” —David Thomson