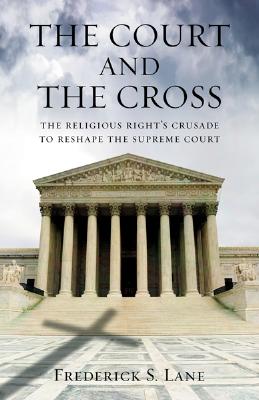 By Frederick Lane
$24.95
Email or call for price

While President George W. Bush has appointed two Supreme Court justices during his terms in office, the next president may be in a position to appoint up to three new justices, replacing one third of the Court. This relatively high number could drastically alter future Supreme Court rulings. Now is the perfect time to consider the role of politics in Supreme Court nominations and in the new appointees' ensuing decisions.

In The Court and the Cross, legal journalist Frederick Lane reveals how one political movement, the Religious Right, has dedicated much of the last thirty years to molding the federal judiciary, always with an eye toward getting their choices onto the Supreme Court. This political work has involved grassroots campaigns, aggressive lobbying, and a well-tended career path for conservative law students and attorneys, and it has been incredibly effective in influencing major Court decisions on a range of important social issues. Recent decisions by the Right's favored judges have chipped away at laws banning prayer in school, bolstered restrictions on women's access to abortion and birth control, and given legal approval to President Bush's use of federal funds for religious organizations.

In the near future, the courts will confront a host of hot-button issues, from stem cell research and gay rights to religious expression on government property and euthanasia. As the courts hear cases driven by an evangelical agenda and tainted with religious rhetoric, Lane surveys the damage to the wall separating church and state and asks, Has the Religious Right done irreparable harm?

As a new president takes office, it is more important than ever to understand the political and social forces behind the Supreme Court nomination process. The Court and the Cross is a revealing look at how much has already been lost, thanks to the concerted efforts of the Religious Right to change the Court, and a timely warning of how much more we could yet lose.

Separation of church and state is so basic a part of American values and history that it is hard to realize it is under threat. But it is, profoundly. In The Court and the Cross Frederick Lane explains why: a relentless, determined and successful campaign by the Christian Right to put its supporters on the federal courts, especially the Supreme Court. It is a colorful and compelling book.—Anthony Lewis, author of Freedom for the Thought We Hate: A Biography of the First Amendment

"The Court and the Cross is a commendable and sobering account of the scope and significance of the Christian Right's incessant efforts to make a mockery of core constitutional principle. Not only does it elegantly review key Supreme Court cases about religion, it points to the extensive range of social issues the Right is working to get up for examination before our highest court, an increasingly conservative body. If you are not sure that the decisions of the Supreme Court matter much to you in your daily life, read The Court and the Cross and I guarantee you'll be rethinking that position. The Court's erosion of your individual religious freedom and the dictates of your conscience has already begun."—Rev. Barry Lynn, executive director of Americans United for the Separation of Church and State and author of Piety & Politics: The Right-Wing Assault on Religious Freedom

"With wit, legal erudition and political acumen, Lane explains exactly why the power to appoint federal judges with lifetime tenure may be a president’s most significant legacy and why liberals have been asleep at the switch while conservatives have had their way with the courts. This timely and disturbing book offers a much-needed wakeup call to all who cherish our Constitution and understand that the separation of church and state was America’s founding gift to its own citizens and the world." —Susan Jacoby, author of The Age of American Unreason

"Nowhere has the religious right's effort to remake America been more successful, or more poorly understood, than in its campaign to control the courts, a campaign rooted in a revisionist history that seeks to write secularism out of the nation's past. Frederick Lane's illuminating, important The Court and the Cross punctures the movement's canards and deftly explains what's at stake. Grounded in a fascinating history, this is compelling, crucial book." —Michelle Goldberg, author of Kingdom Coming: The Rise of Christian Nationalism