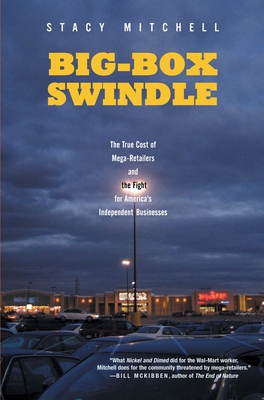 With a New Afterword

In less than two decades, large retail chains have become the most powerful corporations in America. In this deft and revealing book, Stacy Mitchell illustrates how mega-retailers are fueling many of our most pressing problems, from the shrinking middle class to rising pollution and diminished civic engagement—and she shows how a growing number of communities and independent businesses are effectively fighting back.

Mitchell traces the dramatic growth of mega-retailers—from big boxes like Wal-Mart, Home Depot, Costco, and Staples to chains like Starbucks, Olive Garden, Blockbuster, and Old Navy—and the precipitous decline of independent businesses. Drawing on examples from virtually every state in the country, she unearths the extraordinary impact of these companies and the big-box mentality on everything from soaring gasoline consumption to rising poverty rates, failing family farms, and declining voting levels. Along the way, Mitchell exposes the shocking role government policy has played in the expansion of mega-retailers and builds a compelling case that communities composed of many small, locally owned businesses are healthier and more prosperous than those dominated by a few large chains.

More than a critique, Big-Box Swindle provides an invigorating account of how some communities have successfully countered the spread of big boxes and rebuilt their local economies. Since 2000, more than two hundred big-box development projects have been halted by groups of ordinary citizens, and scores of towns and cities have adopted laws that favor small-scale, local business development and limit the proliferation of chains. From cutting-edge land-use policies to innovative cooperative small-business initiatives, Mitchell offers communities concrete strategies that can stave off mega-retailers and create a more prosperous and sustainable future.

Stacy Mitchell is a regular speaker and advisor to communities on retail development and independent business. A senior researcher with the Institute for Local Self-Reliance, she chairs the American Independent Business Alliance . Mitchell regularly contributes articles and commentaries to magazines and newspapers, and produces an acclaimed monthly email newsletter, The Hometown Advantage Bulletin. She lives in Portland, Maine

"A compelling indictment of Wal-Mart and other 'big box' stores, based on numerous national examples."—Publishers Weekly

"Here is the definitive indictment of Wal-Mart and its ilk: how local retailers, family farmers, factory workers and democracy itself have been steamrolled by the illusion of big-box progress. Deftly weaving history, sociology and a crash course on retail economics with affectionate snapshots of tenacious entrepreneurs, Mitchell leaves us with an optimistic vision informed by promising new community initiatives."—Greg LeRoy, author of The Great American Jobs Scam and executive director of Good Jobs First

"In the muckraking tradition of Fast Food Nation, this is a searing indictment of the impact of behemoth retailers . . . It illuminates a stunning collection of business outrages, government favoritism, environmental damages, hidden economic and societal costs, debunked myths and a rising sweel of consumer activism against big-box blight . . . Big-Box Swindle takes mega-retailers to task in convincing fashion. But Mitchell also provides inspiring lessons from places that are turing the tide." —John Marshall, Seattle Post-Intelligencer, which included Big-Box Swindle in its Top Ten 2006 list

"What Nickel and Dimed did for the Wal-Mart worker, Mitchell does for the community threatened by mega-retailers." —Bill McKibben, author of The End of Nature

"Through rich, real-life stories, Stacy Mitchell reveals that those 'low prices' so proudly promoted by big-box behemoths come at an intolerably high cost to our communities and culture. Can we beat the behemoths? Yes! And Mitchell shows us the way. Read on, take heart, and take action!"—Jim Hightower, national radio commentator, writer, public speaker, and best-selling author

"Stacy Mitchell provides an astonishing exposé of the broad-reaching implications of our shopping habits. Big-Box Swindle should be required reading for everyone who cares about America's main streets, as well as a call to arms for small businesses everywhere to organize and take action."—Kennedy Smith, former director of the National Trust for Historic Preservation's National Main Street Center

"A well-researched and frightening book about an economic pandemic engulfing the United States . . . The big boxes are draining cities and towns of money and bankrupting neighborhood
businesses that have long been the backbone of American communities. Big-Box Swindle is a book every citizen needs to read."—Ben H. Bagdikian, author of The New Media Monopoly

"A great read! The big-box shadow looms over us mightily, but, as Stacy Mitchell documents, hundreds of communities have already saved themselves. She tells us how they did it and firmly invites us to step forward into the light. Change-a-lujah!"—Reverend Billy, leader of the Church of Stop Shopping