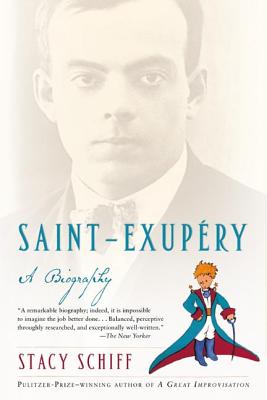 From a master biographer, the life story of the daring French aviator who became one of the twentieth century's most beloved authors

Antoine de Saint-Exupéry disappeared at age forty-four during a reconnaissance flight over southern France. At the time he was best known for a career of daring flights over the Sahara, the Pyrenees, and Patagonia and for his contributions to the science of aviation. But the solitary hours he spent above the earth in open cockpit airplanes gave birth to a more famous legacy, a series of enchanting, autobiographical novels and the classic story The Little Prince, still the most translated book in the French language.

An impoverished aristocrat from one of France's oldest families, Saint-Exupéry moved at age twenty-seven to the western Sahara Desert, to live alone in a plank shack and manage the way station for the Aéropostale, the French mail service. His careers as a novelist and an aviator were born here, and his life once he returned to Europe was defined—with brilliant and catastrophic results—by the sense of isolated fascination and curiosity he developed in the desert.

"A remarkable biography; indeed, it is impossible to imagine the job better done. It is balanced, perceptive, thoroughly researched, and exceptionally well-written." —The New Yorker

Stacy Schiff is the author of Vera (Mrs. Vladimir Nabokov), which won the Pulitzer Prize for biography in 2000, and Saint-Exupery, which was a finalist for the 1995 Pulitzer Prize. Schiff's work has appeared in The New Yorker, The New York Times Book Review, The Washington Post, and The Times Literary Supplement. She has received fellowships from the Guggenheim Foundation, the National Endowment for the Humanities, and the Center for Scholars and Writers at the New York Public Library. She lives in New York City.

"This captivating biography deftly separates the man from the myth, revealing an awkward, petulant idealist, an elitist who advocated oligarchy, a pilot known for his mishaps and absentmindedness, and an unhappily married adventurer whose abusive wife eventually reached an uneasy accommodation with his mistress. " - Publishers Weekly