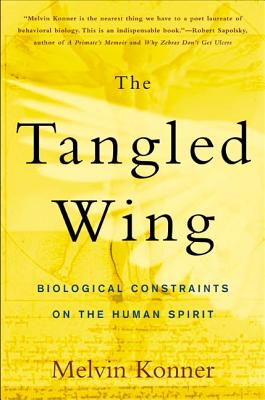 By Melvin Konner
Out of Print

A vital updating of a seminal work of science
First published to great acclaim twenty years ago, The Tangled Wing has become required reading for anyone interested in the biological roots of human behavior. Since then, revolutions have taken place in genetics, molecular biology, and neuroscience. All of these innovations have been brought into account in this greatly expanded edition of a book originally called an "overwhelming achievement" by The Times Literary Supplement.
A masterful synthesis of biology, psychology, anthropology, and philosophy, The Tangled Wing reveals human identity and activity to be an intricately woven fabric of innumerable factors. Melvin Konner's sensitive and straightforward discussion ranges across topics such as the roots of aggression, the basis of attachment and desire, the differences between the sexes, and the foundations of mental illness.

Melvin Konner, M.D., Ph.D., is the Samuel Candler Dobbs Professor of Anthropology and an associate professor of neurology at Emory University. He is the author of Becoming a Doctor and Why the Reckless Survive and Other Secrets of Human Nature. A Fellow of the American Association for the Advancement of Science, he lives in Atlanta, Georgia.

“How wonderful to have a new Tangled Wing which incorporates the rich findings made in the last twenty years in the fields of evolutionary and behavioral biology. We find the same graceful writing as in the original classic and the same facility to clarify complex issues and to come to stimulating conclusions.” —Ernst Mayr, Professor Emeritus, Harvard University