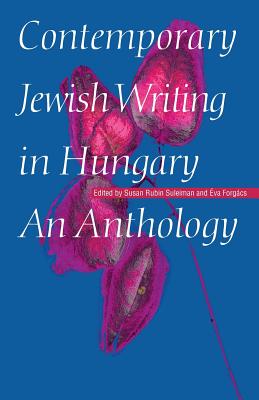 Contemporary Jewish Writing in Hungary features works by twenty-four of Hungary’s best writers who have written about what it means to be Jewish in post-Holocaust Eastern Europe. This volume includes work by Nobel Prize winner Imre Kertész and other internationally known writers such as György Konrád and Péter Nádas, but most of the authors appear here in English for the first time. This anthology features poetry, long and short stories, and excerpts from memoirs and novels by postwar writers. Some of these authors were well known in Hungary before World War II, some were children or adolescents during the war and began publishing in the 1970s, some were born to survivors in the years immediately following the war and grew up during the decades of Communist rule, while others started publishing chiefly after the fall of Communism in 1989. Unique among Eastern European countries, Hungary still has a large and visible Jewish population, many of them writers and intellectuals living in Budapest. This anthology introduces English-speaking readers to outstanding works of literature that show the wide range of responses to Jewish identity in contemporary Hungary. The editors’ introduction provides a historical and critical context for these works and discusses the important role of Jews in Hungarian culture from the late nineteenth century to the present.

Susan Rubin Suleiman is C. Douglas Dillon Professor of the Civilization of France and a professor of comparative literature at Harvard University. Her many books include Budapest Diary: In Search of the Motherbook (Nebraska 1996) and Risking Who One Is: Encounters with Contemporary Art and Literature. Éva Forgács, formerly a professor of art history at the Hungarian Academy of Crafts and Design, teaches at Art Center College of Design, Pasadena, California. Her books include The Bauhaus Idea and Bauhaus Politics and the co-edited volume Between Worlds: A Sourcebook of Central European Avant Gardes, 1910–1930. Contributors include: Zsófia BallaIstván Gábor BenedekGyörgy DalosMária EmberÁgnes GergelyPéter KántorImre KertészGyörgy G. Kardos György KonrádMihály KornisPéter LengyelStefánia MándyLászló MártonPéter NádasOttö OrbánIstván ÖrkényBalázs SimonGyörgy SomlyóGyörgy SpiróGábor T. SzántoErnö SzépEszter Tábor István VasBéla Zsolt.