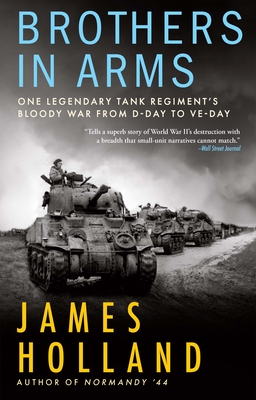 In the annals of World War II, certain groups of soldiers stand out, and among the most notable were the Sherwood Rangers. Originally a cavalry unit in the last days of horses in combat, whose officers were landed gentry leading men who largely worked for them, they were switched to the "mechanized cavalry" of tanks in 1942. Winning acclaim in the North African campaign, the Sherwood Rangers then spearheaded one of the D-Day landings in Normandy on June 6, 1944, led the way across France, were the first British troops to cross into Germany, and contributed mightily to Germany's surrender in May 1945.

Inspired by Stephen Ambrose's Band of Brothers, acclaimed WWII historian James Holland memorably profiles an extraordinary group of citizen soldiers constantly in harm's way. Their casualties were horrific, but their ranks immediately refilled. Informed by never-before-seen documents, letters, photographs, and other artifacts from Sherwood Rangers' families--an ongoing fraternity--and by his own deep knowledge of the war, Holland offers a uniquely intimate portrait of the war at ground level, introducing heretofore unknowns such as Commanding Officer Stanley Christopherson, squadron commander John Semken, and Sergeant George Dring, and other memorable characters who helped the regiment become the single unit with the most battle honors of any ever in the British army. He weaves the Sherwood Rangers' exploits into the larger narrative and strategy of the war, and also brings fresh analysis to the tactics used.

Following the Sherwood Rangers' brutal journey over the dramatic eleven months between D-Day and V-E Day, Holland presents a vivid and original perspective on the endgame of WWII in Europe.

One of WWII's finest historians, James Holland is the author of Sicily '43, Normandy '44, Big Week, The Rise of Germany and The Allies Strike Back in the War in the West trilogy, and Dam Busters. He has written and presented the BAFTA shortlisted documentaries Battle of Britain and Dam Busters for the BBC, and his WWII podcast, We Have Ways of Making You Talk, now has millions of listeners.griffonmerlin.com@james1940