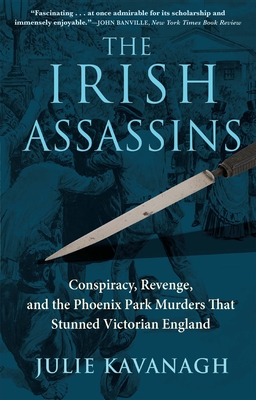 Ireland, 1879-1882. After 700 years of British rule, the post-Famine generation of Irish tenant farmers began to push back against the reigning feudal system of landownership. The charismatic political leader, Charles Stewart Parnell, headed up the Land League, a revolutionary movement that promised to restore land and power to the people through a series of protests, strikes, and boycotts. After what became known as the Irish Land War had escalated into nationwide anarchy, Parnell and two associates were incarcerated without trial in Kilmainham Gaol. In April 1882, Parnell secretly forged the Kilmainham Treaty, a pact in which he pledged to work diplomatically with British Prime Minister William Gladstone for peace and the eventual independence of Ireland from England. It was a moment of real hope and a potential turning point in history, one that Gladstone himself described as "golden."

Yet it would be shattered one sunlit evening, on May 6, l882, as Gladstone's emissary, Lord Frederick Cavendish, who had arrived that day in Dublin, and Thomas Burke, the undersecretary for Ireland, were ambushed and stabbed to death while strolling through Phoenix Park in Dublin. The murders were funded by American supporters of Irish independence and carried out by the Invincibles, a militant faction of republicans armed with specially made surgeon's blades. The impact of the assassinations was so cataclysmic that it destroyed the peace pact, almost brought down the government, and set in motion repercussions that would last long into the twentieth century.

In a story that spans Donegal, Dublin, London, Paris, New York, Cannes, and Cape Town, Julie Kavanagh traces the crucial events that came before and after the murders. From Parnell's passionate affair with an Irish MP's wife, Katharine "Kitty" O'Shea, which eventually caused his downfall, to Queen Victoria's prurient obsession with the assassinations; from the investigation spearheaded by Superintendent John Mallon, the "Irish Sherlock Holmes," who tirelessly tracked down each member of the Invincibles, to the eventual betrayal and clandestine escape of leading Invincible James Carey and his murder on the high seas; The Irish Assassins brings us intimately into this fascinating story that shaped Irish politics and engulfed an empire. This is an unputdownable book from one of our most "compulsively readable" (Guardian) writers.

Julie Kavanagh is the author of Secret Muses: The Life of Frederick Ashton; Nureyev: The Life, which was shortlisted for a Costa Book Award, the PEN/Jacqueline Bograd Weld Award, and was longlisted for the Samuel Johnson Prize; and The Girl who Loved Camellias. Kavanagh has held positions as the London editor of Vanity Fair and the New Yorker. She divides her time between London, North Wales, and Puglia.