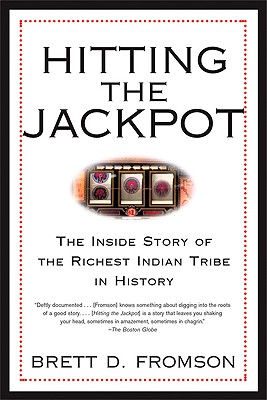 In 1635, the first Puritans migrated from Massachusetts Bay to the Colony of Connecticut. By 1637, Puritan settlers in Connecticut were at war with the Pequot Indian tribe. In retaliation for a Pequot raid, Captain John Mason led an assembled militia of English and Indian allies in a pre-dawn attack on a Pequot fort that left over four hundred Pequots dead. Within two years, the Pequot tribe was all but extinguished, and would remain that way for the next three hundred and fifty years.
Then in 1973, the last remaining descendent of the Pequots to live on the tribal reservation, Elizabeth George Plouffe, passed away, but not before imparting advice to her grandson Richard "Skip" Haywood: "Hold onto the land." These words would manifest themselves into an almost thirty year legal and political drama that would lead Hayward and his relatives to recreate the Pequot tribe and become the richest Indians in history. How it happened is the subject of Brett Duval Fromson's Hitting the Jackpot. The culmination of a three-year investigation, Fromson uncovers a labyrinthine tale of legal maneuverings, back room political dealings, and ethnic reinvention. Fromson details the step-by-step process by which today's Pequots gained tribal recognition, hired top lawyers to claim thousands of acres of land, exploited a state law meant for church yard sales to gain the right to open Foxwoods, now a $1.2 billion dollar a year operation, and distilled the barest traces of Pequot lineage into a full-fledged tribe with over 600 new tribal members, a yearly pow-wow that offers the biggest cash prizes in America and a $250 million museum, one of the costliest in American history.
As controversy over Indian casino gambling sweeps across the United States, Hitting the Jackpot reveals the true story of how the Mashantucket Pequots of Connecticut became the richest Indian tribe in history.