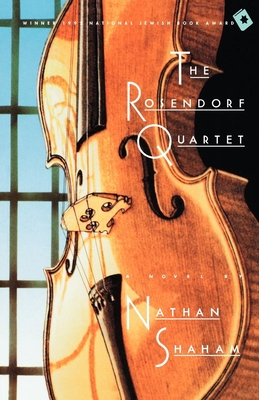 Four German Jews, all refugees from Nazi Germany, and all first-rate musicians, arrive in Palestine in the 1930s. There they join a symphony orchestra, which although made up of Europeans serves as a propaganda vehicle for the Zionist state-in-the-making. Unable to express themselves within this melting-pot orchestra, they join together to form The Rosendorf Quartet. In this compelling and provocative novel, awarded Israel's prestigious Bialik Prize for Literature, Nathan Shaham examines the plight of these refugees, who must adjust to the old-new land--a place fraught with political struggle and impending violence.
Kurt Rosendorf, the quartet's founder and first violin, would like to believe that his true homeland is music. Forced to leave his Christian wife and daughter in Berlin, he cannot adjust to life in Palestine and tries to live "outside history and geography." Konrad Friedman, second violin, is a young Zionist who constantly battles the urge to renounce the European, cultured life of the musician and dedicate himself to the Jewish cause. Bernard Litovsky, the cellist, is tired of wandering and longs for firm ground and a sense of home. The fourth in the quartet is the stunning Eva Staubenfeld, whose beauty and sexual liberation baffle and mesmerize her colleagues. Relieved to be far from the abuses of her past, she is furious that the accident of being born Jewish has disrupted her life. Uniting the four is Egon Loewenthal, a brilliant and underrated German author who has survived Dachau but cannot forsake the language of his persecutors. He decides that his next novel, written in German, will be about the quartet. The Rosendorf Quartet is not only a deft portrait of the complexities and contradictions that have gone to make up the state of Israel; it is also a stunning tribute to the curative powers of music, in whose realm dissonance, politics, and personal anguish dissolve into art, transcending human conflict and national boundaries.