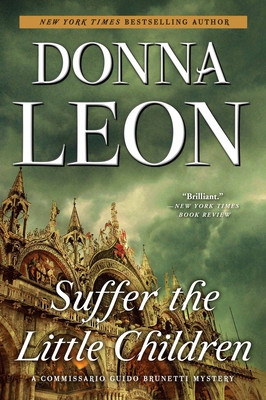 "Donna Leon is the undisputed crime fiction queen . . . Her] ability to capture the city's social scene and internal politics is first-rate, as always, but this installment carries extra gravity and welcome plot twists that make it one of the series' better efforts." --Sarah Weinman, Baltimore Sun

Donna Leon's charming, evocative, and addictive Commissario Guido Brunetti mysteries are widely acclaimed national and international best sellers, reaching a wider audience in the United States than ever before. Her latest, Suffer the Little Children, is classic Brunetti, a fantastic addition to the series.

When Commissario Brunetti is summoned in the middle of the night to the hospital bed of a senior pediatrician, he is confronted with more questions than answers. Three men--a young Carabiniere captain and two privates from out of town--had burst into the doctor's apartment while the family was sleeping, attacked him, and taken away his eighteen-month-old boy. What could have motivated an assault by the forces of the state so violent that it has left the doctor mute? Who would have authorized such an alarming operation?

As Brunetti delves into the case, he begins to uncover a story of infertility, desperation, and illegal dealings. At the same time, Brunetti's colleague, Inspector Vianello, discovers a moneymaking scam between pharmacists and doctors in the city. But it appears as if one of the pharmacists is after more than money. What secrets are in the records? And what has been done with them? Donna Leon's new novel is as subtle and fascinating as her best mysteries, set in a beautifully realized Venice, a glorious city seething with small-town vice.

Donna Leon is the author of the highly acclaimed, internationally bestselling Commissario Guido Brunetti mystery series. The winner of the CWA Macallan Silver Dagger for Fiction, among other awards, Donna Leon lived in Venice for many years and now divides her time between Venice and Switzerland.