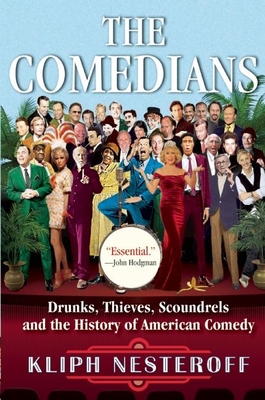 “This is a sweeping, in-depth story of how American comedy evolved from its earliest days. From Vaudeville and radio to mob-controlled night clubs and television, Nesteroff is adept at showing how the seedy underbelly of show business shaped the stars of yesterday and today. Stuffed to the brim with amusing anecdotes and insider gossip, it is an eye-opening trip. A former comedian himself, Nesteroff has long been a chronicler of the history of comedy in America, and this book is the culmination of years of interviews and research. Fun, entertaining, and insightful.”
— Jay Aubrey-Herzog, Northtown Books, Arcata, CA

Jokes change from generation to generation, but the experience of the comedian transcends the ages: the drive, jealousy, heartbreak, and triumph. From the Marx Brothers to Milton Berle to George Carlin to Eddie Murphy to Louis CK--comedy historian Kliph Nesteroff brings to life a century's worth of rebels and groundbreakers, mainstream heroes and counterculture iconoclasts, forgotten stars and workaday plodders in this essential history of American comedy. Beginning with the nationwide vaudeville circuits that dominated at turn of the twentieth century, Nesteroff describes the rise of the first true stand-up comedian--a variety show emcee who abandoned physical shtick for straight jokes. The end of Prohibition ushered in a surprising golden age of comedy, as funnymen were made into radio stars and the combination of the Borscht Belt, the Chitlin Circuit, and Mafia-run supperclubs furnished more jobs and money than ever before. Those were the days of the Copacabana, tuxedos, and smoking cigars onstage, when insulting the boss could result in a hit man at your door and obscenity charges could land you in jail. In the 1950s, late-night television cemented the status of the comedy establishment while young comics rebelled, arriving on the beatnik coffeehouse scene with cerebral jokes and social angst. They soon found their own way to fame through comedy records that vied with top musicians for Billboard spots. Then came the comedy clubs of the coke-fueled 1970s and 80s, Saturday Night Live and cable TV, and with the internet, a whole new generation of YouTube stars, podcast personalities, and Twitterati. Through the decades, Nesteroff reveals the contradictions between comedians' public and private personas and illuminates the often-seedy underbelly of an industry built on laughs. Based on over two hundred original interviews and extensive archival research, The Comedians is a sharply written and highly entertaining look at one hundred years of comedy, and a valuable exploration of the way comedians have reflected, shaped, and changed American culture along the way.