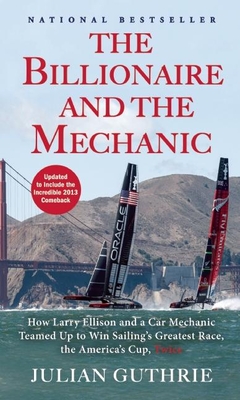 Expanded to include the behind-the-scenes story of the 34th America's Cup and Team USA's incredible comeback Down eight-to-one in the 34th America's Cup in September 2013, Oracle Team USA pulled off a comeback for the ages, with eight straight wins against Emirates Team New Zealand. Julian Guthrie's The Billionaire and the Mechanic tells the incredible story of how a car mechanic and one of the world's richest men teamed up to win the world's greatest race. With a lengthy new section on the 34th America's Cup, Guthrie also shows how they did it again. The America's Cup, first awarded in 1851, is the oldest trophy in international sports. In 2000, Larry Ellison, co-founder and billionaire CEO of Oracle Corporation, decided to run for the prize and found an unlikely partner in Norbert Bajurin, a car mechanic and Commodore of the blue-collar Golden Gate Yacht Club. After unsuccessful runs for the Cup in 2003 and 2007, they won for the first time in 2010. With unparalleled access to Ellison and his team, Guthrie takes readers inside the building process of these astonishing boats and the lives of the athletes who race them and throws readers into exhilarating races from Australia to Valencia.

Julian Guthrie is an award-winning journalist and staff writer at the San Francisco Chronicle. She is the author of The Grace of Everyday Saints: How a Band of Believers Lost Their Church and Found Their Faith. She lives in Mill Valley, California.

A Forbes Best Book of the Year

[An] excellent book. . . . The story of Mr. Ellison’s decade-long effort to win the Cup and bring it back to the U.S. under Golden Gate’s flag is worth telling, and Julian Guthrie, a reporter for the San Francisco Chronicle, tells it well.”
Wall Street Journal

Splendid . . . Guthrie crisply sketches the complex process that was required for Ellison to establish his own position in the top ranks of yachting and organize the winning team in 2010. A thriller of a tale and a worthy scene-setter for this summer’s trophy defense in San Francisco Bay.”
Kirkus Reviews

The Billionaire and the Mechanic opens with a thrilling scene as old as Homer’s Odyssey’ and as iconic as ones from Conrad, Melville, Hemingway and Sebastian Junger: a man battling a dangerously stormy sea. That the sailor, Larry Ellison, is one of our contemporary captains of industry, the swashbuckling billionaire of the title only heightens the drama. . . . [The Billionaire and the Mechanic] succeeds as a lively primer, history, and up-to-date soap opera, full of local color, leading up to the America’s Cup races in San Francisco Bay.”
San Francisco Chronicle

"Julian Guthrie's riveting book takes readers deep into uncharted realms, from the extremes of the ocean to the sublime connection between two singular men. The Billionaire and The Mechanic is a wondrously detailed story, beautifully told, by a writer who understands both the intricacies of human nature and the immensity of the natural world."
Susan Casey, author of The Wave: In Pursuit of the Rogues, Freaks, and Giants of the Ocean

Surely the most comprehensive book ever written about an America's Cup challenge, The Billionaire and The Mechanic will surely be must reading for any yacht-racing aficionado."
Frank Deford

From the opening scene in this bookand scene is the appropriate word for its cinematic beginningthe reader is swept along on heart-thumping rides on swift, dueling sailboats, past an assemblage of characters worthy of Dreiser, past the shoals of deceit worthy of Dickens, and coming to rest on the formidable character of billionaire Larry Ellison, who has the will-to-win of his best friend, Steve Jobs, and of a mechanic, who made winning possible. Julian Guthrie writes as if with a magic wand, holding the reader spellbound.”
Ken Auletta

"[A] product of first-rate reporting. . . . A riveting account."
Sailing

"Energetically written .... sure to spark interest among racing fans."
Booklist

"This is one helluva great read. Larry and Norbert—beautiful dreamers both, men with faith in their ability to convert them to reality. This book is fascinating; it informs, educates and entertains about the longest continuously contested trophy in all of sports. This is a must read for lovers of sport, and particularly for sailors.”
Bob Fisher, author of An Absorbing Interest: The America's CupA History 1851-2003

"Larry Ellison's America's Cup victory was as improbable as it was inevitable. The same is true of his alliance with radiator repairman Norbert Bajurin. In this absorbing page-turner, Julian Guthrie tells us how they came together to make history."
G. Bruce Knecht, author of The Proving Ground: The Inside Story of the 1998 Sydney to Hobart Race

The Billionaire and the Mechanic is pumping with adrenaline and yet full of subtle, surprising details about both sailing and one of the most mysterious, controversial characters on earth. This book is tirelessly reported and Guthrie has a rare writing gift to tie it all together into a work of literary journalism that reads like a thriller.”
Jaimal Yogis, author of The Fear Project

"If you're interested in the America's Cup competition, or in sailboat racing generally, you'll love this book. Julian Guthrie's taut and fascinating behind-the-scenes account of the colorful personalities, the risky development of astonishing new boats, and the hair-raising racing tactics of Larry Ellison's long campaign to win the trophy is necessary background reading."
Derek Lundy, author of Godforsaken Sea: A True Story of Racing the World's Most Dangerous Waters

"A gripping tale of world-class competition and strategic gamesmanship. . . . It will have enduring value as a great story in its own right."
Sail World

An up-close tour of how the world’s fifth-richest man spent hundreds of millions of dollars, and hired and fired the best sailors on Earth, to win.”
Forbes