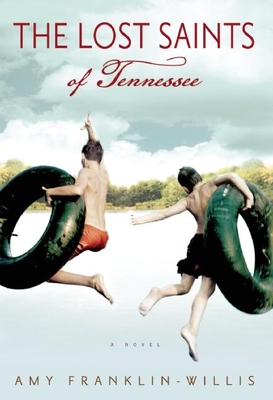 By Amy Franklin-Willis
Out of Print

“Ezekiel Cooper, a 42-year-old divorcee living in Tennessee and still grieving the death of his twin brother 10 years earlier, has decided to end his life and the life of Tucker, his brother's dog. Luckily for the reader he is unsuccessful, and we share his voyage from the 1940s to the 1980s as a son, brother, husband, and father. Ezekiel and his mother relate their tales of mistakes made, the need for forgiveness, and the real meaning of family in a story full of love and grace. You will not want to put this book down.”
— Karen Briggs, Great Northern Books and Hobbies, Oscoda, MI

With enormous heart and dazzling agility, Amy Franklin-Willis expertly mines the fault lines in one Southern working-class family. Driven by the soulful voices of forty-two-year-old Ezekiel Cooper and his mother, Lillian, The Lost Saints of Tennessee journeys from the 1940s to 1980s as it follows Zeke's evolution from anointed son, to honorable sibling, to unhinged middle-aged man. After Zeke loses his twin brother in a mysterious drowning and his wife to divorce, only ghosts remain in his hometown of Clayton, Tennessee. Zeke makes the decision to leave town in a final attempt to escape his pain, throwing his two treasured possessions--a copy of The Adventures of Huckleberry Finn and his dead brother's ancient dog--into his truck, and heads east. He leaves behind two young daughters and his estranged mother, who reveals her own conflicting view of the Cooper family story in a vulnerable but spirited voice stricken by guilt over old sins and clinging to the hope that her family isn't beyond repair. When Zeke finds refuge with cousins in Virginia horse country, divine acts in the form of severe weather, illness, and a new romance collide, leading Zeke to a crossroads where he must decide the fate of his family.

"Pitch-perfect . . . In her powerful debut, Franklin-Willis expertly crafts a Southern novel that stands with genre classics like The Prince of Tides and Bastard Out of Carolina. . . . A measured, slow-burning book, with complex, compelling characters and secrets that reveal themselves slowly. A beautiful novel from a talented new author, The Lost Saints of Tennessee proves that in great literature, as in life, we must always expect the unexpected." Bookpage

"Compelling . . . It is the natural voices of Franklin-Willis's characters and the Southern setting that carry this novel. . . . The author's honest prose rises from the heart. . . . Leaves the reader rooting for the characters until the novel's last page."The Boston Globe

"Anyone who’s ever left home and regretted itor, for that matter, stayed home and regretted itwill find much here to savor, as will those whose family ties consist of the kind of cracked emotional currency Zeke and Lillian have exchanged most of their lives. . . . [The Cooper's] interactions are . . . brusque, impatient, angry, down-to-earth, sorrowfulthey’re a loving but realistic bunch, their attempts to reach each other crusted over with failure. But they don’t give up. What most embodies this spirit, and anchors this vivid, faithfully drawn family history, is Lillian and Zeke’s 25-year-old estrangement, on one side sadly accepting, on the other, fiercely judgmentalboth ready to set the record straight. . . . Though the reader is left to evaluate whose side is more sympathetic, it’s clear that only the two together can make up a whole, one that offers hope and maybe just a little bit of sainthood after all."Atlanta Journal-Constitution

"Poignant . . . Franklin-Willis plumbs the depths of family dynamics, compassionately depicting her characters as they struggle with situations over which they have no control." Library Journal (starred review)

"Rich in spot-on references: readers will taste the cornbread, shiver at the snow on the mountaintops, and be warmed by the Cooper family's love and loyalty through good times and bad."Shelf Awareness

The gifted novelist, Amy Franklin-Willis, has written a riveting, hardscrabble book on the rough, hardscrabble south, which has rarely been written about with such grace and compassion. It reminded me of the time I read Dorothy Allison’s classic, Bastard out of Carolina.”Pat Conroy

The Lost Saints of Tennessee is a joya wonderful, heartbreaking, and ultimately uplifting story about the unbreakable bonds of brotherhood and the human will to survive. I was deeply moved by it and equally impressed.”Elizabeth George

Amy Franklin-Willis’s characters speak with graceful authenticity. The Lost Saints of Tennessee moves from sadness to understanding, through a landscape full of small mysteries and large truths. Franklin-Willis proves herself a writer of promise and talent.”Mark Childress

Franklin-Willis has endless compassion for her working-class southern characters. . . . [An] uplifting story of one man’s attempt to make a better life for himself and his family.”Booklist

I was in love with The Lost Saints of Tennessee all the way through. Every page. It was the most satisfying book I’ve read in a long time.”Catherine Ryan Hyde

In her splendid debut novel, The Lost Saints of Tennessee, Amy Franklin-Willis delivers a tender, lyrical tale about one broken man’s search for forgiveness, healing, and the real meaning of family. Her words ring true on every page and compel us to follow in step as Ezekiel Cooper journeys from the life he has known to the one he so desperately craves.”Susan Gregg Gilmore

Amy Franklin-Willis has given us a first novel full of great love, pathos, and change. A rich and compelling tale of a large family and the complexities of the human spirit, you will not want to put The Lost Saints of Tennessee down. It is a completely satisfying read.”Jeanne Ray