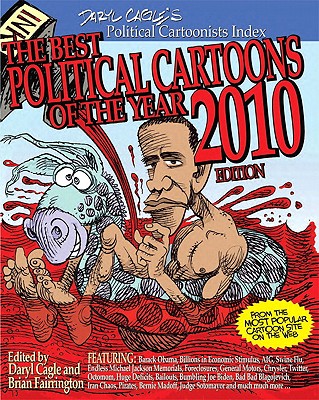 The Best of the Year in Editorial CartoonsThe best cartoonists in the world contributed to this collection of the best cartoons of 2009, from Daryl Cagle's Political Cartoonists Index, the most popular cartoon site on the Web (www.cagle.com). More than 600 cartoons cover the major topics of the historic year when America saw its first black president sworn into office. The economy sank despite humungous bailouts and unemployment hit new highs--not to mention the drama of Octomom, Sotomayor, Swine Flue, GM's bankruptcy, Iran's election chaos and the death of Michael Jackson. This cool book chronicles the history of the year 2009 with cartoons you'll never forget.

Daryl Cagle is the daily editorial cartoonist for MSNBC.com. Daryl's editorial cartoon site with MSNBC.com (www.cagle.com) is the most popular cartoon website of any kind on the Internet. It is also the most widely used education site in social studies classrooms around the world. For the past 30 years, Daryl has been one of America's most prolific cartoonists. Raised in California, Daryl went to college at UC Santa Barbara and then moved to New York City, where he worked for 10 years with Jim Henson's Muppets, illustrating scores of books, magazines, calendars, and all manner of products.In 2001, Daryl started a new syndicate, Cagle Cartoons, Inc. (www.caglecartoons.com), which distributes the cartoons of sixty editorial cartoonists and columnists to more than 800 newspapers in the United States, Canada, and Latin America. Daryl is a past president of the National Cartoonists Society and current president of the National Cartoonists Society Foundation. He is a frequent guest on Fox News, CNN, and MSNBC. Daryl is a popular and entertaining public speaker. Interested in having Daryl speak to your group? Contact us through www.caglecartoons.com for more information. Brian Fairrington, a graduate of Arizona State University, earned a bachelor's degree in political science and a master's degree in communications.Brian is one of the most accomplished young cartoonists in the country. Brian was the recipient of the Locher Award, the Charles M. Schulz Award, and several Society of Professional Journalists awards and Gold Circle Awards. He is a regular on the Phoenix-based television talk show Horizon, for which one of his appearances garnered an Emmy award. Brian has also been a guest on Imus in the Morning and was recently featured on CBS News Sunday Morning.Brian's cartoons are nationally syndicated to more than 800 newspapers and publications in America with Caglecartoons.com. His cartoons have appeared in The New York Times, USA Today, and Time, as well as on CNN, MSNBC, and Fox News. Additionally, his cartoons regularly appear on www.cagle.msnbc.com.Brian is a native of Arizona and is married to the wonderful Stacey Heywood; they have four children.