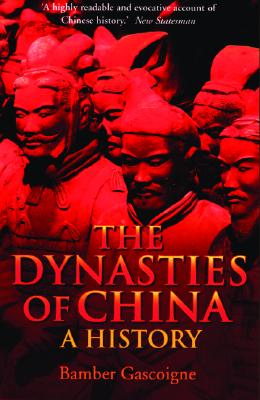 By Bamber Gascoigne
$14.00
Email or call for price

Shang, Chou, Han, T’ang, Sung, Yuan, Ming, Ch’ing — for most Westerners, they stand only as adjectives to describe a lacquer, a bronze, a silk, a watercolor. And for all the familiarity a blue and white porcelain vase from the Ming dynasty or the bright and sturdy pottery figures of horses and grooms from the T’ang may now have acquired, the history of the civilization that produced them remains obscure. So do the names of the potters and artists and philosophers and emperors and generals — except perhaps for those of Kublai Khan, who was not Chinese, and K’ung Fu Tzu — known as Confucius — who flourished a century before Socrates. Focusing upon the incidents and personalities that epitomize most vividly each of the dynasties, this lucidly narrated volume, beautifully illustrated by a lavish selection of color photographs, places in their historical context the images that came to define imperial China from its origins in 1600 B.C. to the revolution of Sun Yat-sen in October 1911. It provides a background to China’s turbulent twentieth century, which is surveyed in an informative postscript, highlighting such events as the troubled presidency of Chiang Kai-shek, Mao Tse-tung’s ruthless Cultural Revolution, and the 1989 student protests in Beijing’s Tiananmen Square.