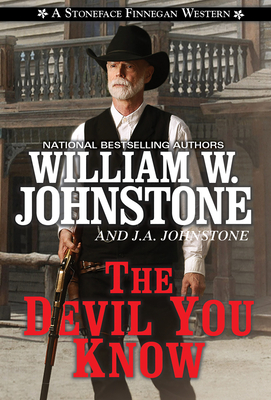 This is book number 2 in the A Stoneface Finnegan Western series.

Legendary bestselling Western authors William W. Johnstone and J.A. Johnstone return with the blazing sequel to By the Neck, a new adventure featuring Stoneface Finnegan, the former Pinkerton agent now serving up shots of justice as the owner of a boomtown saloon in Idaho Country.


JOHNSTONE COUNTRY. LOOKING FOR TROUBLE? THEN LOOK NO FURTHER.

As a Pinkerton agent, Stoneface Finnegan faced the deadliest killers in the West. But now that he runs a saloon, he serves them hard liquor--with a shot of harder justice...

THE DEVIL WALKS INTO A BAR

Stoneface Finnegan and his new partner are busy renovating The Last Drop Saloon when a very unusual stranger comes to town. He's nothing like the prairie rat drifters, world-weary miners, and would-be outlaws who normally pass through Boar Gulch. No, he's a big handsome devil from San Francisco, Giacomo Valucci. Valucci fancies himself an actor, but his all-too-dramatic arrival is no act. He's come to kill Stoneface Finnegan...

Finnegan's gut tells him that someone's put a price on his head. Maybe one of his cutthroat enemies from his Pinkerton days. Or maybe not.

Giacomo Valucci seems more interested in playing the role of Jack the Ripper. He's carving a path of mayhem and murder across the American West--and saving Stoneface Finnegan for the last act...and the final curtain.