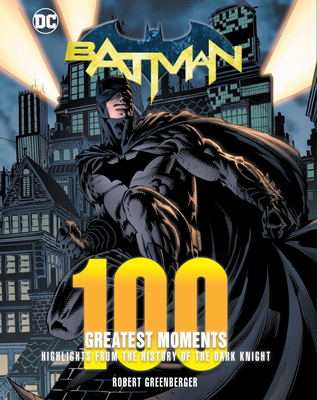 This is book number 2 in the 100 Greatest Moments of DC Comics series.

The Bat. The Caped Crusader. The Dark Knight. The World's Greatest Detective. Whatever you call him, Bruce "The Batman" Wayne remains one of the most iconic comic book characters of all time. This volume encapsulates the most memorable moments that have left fans stunned, in awe, or heartbroken since his inception in 1939.

Batman has had many writers, his cowl has been worn by a plethora of different actors, and while many people have a favorite Batman, there's no doubt that he's the fan favorite. With this book, relive Batman's greatest 100 moments with choice comic book spreads, covers, and comic book panels.  Broken up into key themes prevalent in the Batman Comics (villains, allies, his origins, his lovers, and when Batman goes out of this world), Batman: 100 Greatest Moments encompasses all aspects of everyone's favorite billionaire vigilante.

While Gotham is perpetually in peril, the world in general is better with the Bat in it. Whether it's his sharp wit, his extravagant mansion, or extensive back catalog of vehicles and gadgets. From creator Bob Kane to Tom King's 100-issue run that started in 2018, Batman has morphed with the times.

There's so much to love about Batman and the characters that surrounds them. His villains, his Robins, his love interests…they all find him as irresistible as the general public. The moral ambiguity that makes him one of the most relatable characters in DC's extended universe. Part of "The Big Three" and host to a slew of orphaned Robins, Batman is a pivotal part to many characters in the extended DCU.

No comic book nerd's collection is complete without Batman: 100 Greatest Moments. This gift edition comes in a convenient portable size, perfect for catching up with your favorite caped hero when you're on the go.

Robert Greenberger has long worked in the pop-culture field, including tenures at Starlog Press, DC Comics, Marvel Comics, and Weekly World News. His works include The Essential Batman Encyclopedia, Spider-Man Vault (co-written with Peter David), and Stan Lee's How to Write Comics (co-written with Stan Lee). He has over a dozen Star Trek books to his credit, in addition to editing the comic book adaptations for eight years. For more information, see his website, bobgreenberger.com.