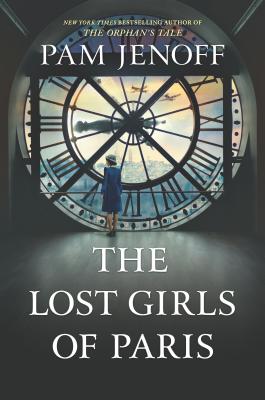 It’s 1946 and Grace Healy is walking through Grand Central Station when she spots a suitcase tucked under a bench. Curious, Grace opens the suitcase and finds photos of 12 different women. She takes the pictures and is determined to find out who they are. She learns that these women, who were sent from London to Occupied Europe during WW II, have never returned. The author of The Orphan’s Tale brings us riveting novel that is based on the true story of these heroic missing spies.  —Elaine

“Pam Jenoff specializes in finding a piece of history that has not been fully explored and that often leaves one thinking truth is stranger than fiction. In The Lost Girls of Paris, she returns to WWII but this time her protagonists are a group of British women recruited to blend into the French countryside and sabotage the Nazi network in preparation for D-Day. The story, told from the perspective of three women, ties up a whodunit in a satisfying knot with a little romance, but it’s really a lot more about women finding out who they are and what role they can play in making a difference in the world.”
— Cathy Fiebach, Main Point Books, Wayne, PA

Look for Pam Jenoff's new novel, The Woman with the Blue Star, an unforgettable story of courage and friendship during wartime.

"Fraught with danger, filled with mystery, and meticulously researched, The Lost Girls of Paris is a fascinating tale of the hidden women who helped to win the war." --Lisa Wingate, New York Times bestselling author of Before We Were Yours

From the author of the runaway bestseller The Orphan's Tale comes a remarkable story of friendship and courage centered around three women and a ring of female secret agents during World War II.

One morning while passing through Grand Central Terminal on her way to work, Grace Healey finds an abandoned suitcase tucked beneath a bench. Unable to resist her own curiosity, Grace opens the suitcase, where she discovers a dozen photographs--each of a different woman. In a moment of impulse, Grace takes the photographs and quickly leaves the station.

Grace soon learns that the suitcase belonged to a woman named Eleanor Trigg, leader of a network of female secret agents who were deployed out of London during the war. Twelve of these women were sent to Occupied Europe as couriers and radio operators to aid the resistance, but they never returned home, their fates a mystery. Setting out to learn the truth behind the women in the photographs, Grace finds herself drawn to a young mother turned agent named Marie, whose daring mission overseas reveals a remarkable story of friendship, valor and betrayal.

Vividly rendered and inspired by true events, New York Times bestselling author Pam Jenoff shines a light on the incredible heroics of the brave women of the war and weaves a mesmerizing tale of courage, sisterhood and the great strength of women to survive in the hardest of circumstances.

"An intriguing mystery and a captivating heroine make The Lost Girls of Paris a read to savor " --Kate Quinn, New York Times bestselling author of The Alice Network

The Last Summer at Chelsea Beach