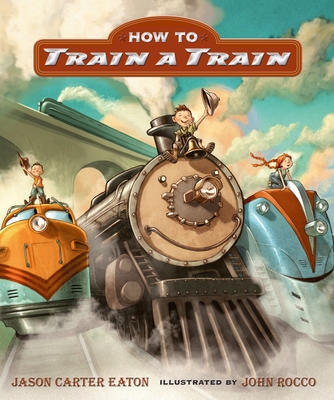 Everything you need to know about finding, keeping, and training your very own pet train.

Finding advice on caring for a dog, a cat, a fish, even a dinosaur is easy. But what if somebody’s taste in pets runs to the more mechanical kind? What about those who like cogs and gears more than feathers and fur? People who prefer the call of a train whistle to the squeal of a guinea pig? Or maybe dream of a smudge of soot on their cheek, not slobber? In this spectacularly illustrated picture book, kids who love locomotives (and what kid doesn’t?) will discover where trains live, what they like to eat, and the best train tricks around—everything it takes to lay the tracks for a long and happy friendship. All aboard!

Jason Carter Eaton is the author of the picture book The Day My Runny Nose Ran Away and the YA novel The Facttracker. He has written for such diverse venues as McSweeney’s, Cartoon Network, MGM, and BBC Radio and has done extensive work at 20th Century Fox animation, Blue Sky Studios, where he received story credit for Ice Age: Dawn of the Dinosaurs. Jason Carter Eaton lives in Westchester, New York, with his wife, two kids, dog, cat, and pet steam engine.

John Rocco is the illustrator of The Flint Heart, a 2011 abridgment crafted by Katherine and John Paterson from the 1910 Eden Phillpott fantasy. John Rocco’s picture book Blackout earned him a 2012 Caldecott Honor. His other picture books include Fu Finds the Way, Wolf! Wolf!, and Moonpowder. He is the jacket artist for Rick Riordan’s best-selling Percy Jackson and the Olympians series, and collaborated with Whoopi Goldberg on the picture book Alice. He was previously creative director at Walt Disney Imagineering and served as preproduction director at Dreamworks for the film Shrek. John Rocco lives in Brooklyn.

I saved my favorite for last. 'How to Train a Train' is exactly that: a guidebook that teaches children how to capture and tame wild trains. ... Jason Carter Eaton's deadpan prose is calibrated just-so. He wisely leaves the abundant belly laughs to John Rocco's paintings, which have their own zany style...
—The New York Times Book Review

Juxtaposing sensible tips with the absurdity of a huge pet locomotive creates a text that is at once believable and preposterous. ... But what really makes this concept roar down the track are the entrancing digitally colored illustrations that perfectly capture the expressiveness and playfulness of the pet trains. ... [T]his book is sure to be popular with train and pet lovers alike.
—School Library Journal (starred review)

Train and pet enthusiasts alike will delight in this rollicking story about selecting, naming, soothing and caring for a full-sized locomotive. ... With believable expressiveness in the characterizations of the trains and a scale perfect for groups, this affectionate sendup communicates all the exasperation, responsibility and rewards of having a pet.
—Kirkus Reviews (starred review)

The premise is delightful... Rocco’s characteristic art is digitally colored, imbuing it with a slick, almost metallic smoothness while graphite outlines provide solidness and occasional texture; compositions are nicely balanced throughout, with full spreads of Fido, Sparkles, and Smokey allowing viewers to fully appreciate the enormity of by this particular type of pet.
—Bulletin of the Center for Children's Books

The conversational text is exploded by John Rocco’s zany, digitally colored illustrations. Learn about how these mysterious beasts travel (freights move in herds, monorails alone) and what you need to trap them (big nets are good, quicksand works, but smoke signals are best). Eaton even explains how to soothe a jumpy engine: “Few trains can resist a read-aloud.” Few kids, either — especially when the subject is trains and the words go “Rocka-rocka, clickety-clack” down the track.
—The Washington Post

Eaton's fanciful, funny text is perfectly accompanied by John Rocco's energetic illustrations. ... This book is sure to be a huge hit with young railroad enthusiasts everywhere.
—BookPage