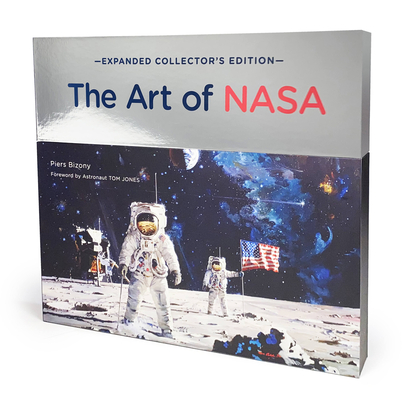 In this expanded collector’s edition of The Art of NASA, complete with a paper model Lunar Module and a poster, explore over 200 stunning artworks commissioned by NASA to sell its missions.

Formed in 1958, NASA has long maintained a department of visual artists to depict the concepts and technologies created in humankind’s quest to explore the final frontier. Culled from a carefully chosen reserve of approximately 3,000 files deep in the NASA archives, the 200+ awe-inspiring illustrations presented in this special boxed edition are complemented by:

From space suits to capsules, from landing modules to the Space Shuttle, the International Space Station, and more recent concepts for space planes, The Art of NASA presents 60 years of American space exploration in an unprecedented fashion. All the landmark early missions are represented in detail—Gemini, Mercury, Apollo—as are post-Space Race accomplishments, like the mission to Mars and other deep-space explorations.

The insightful text relates the wonderful stories associated with the art. For instance, the incredibly rare early Apollo illustrations show how Apollo might have looked if the landing module had never been developed. Black-and-white Gemini drawings illustrate how the massive NASA art department did its stuff with ink pen and rubdown Letraset textures. Cross-sections of the Apollo–Soyuz Test Project docking adapter reveal Russian sensitivity about US “male” probes “penetrating” their spacecraft, thus the androgynous “adapter” now used universally in space. International Space Station cutaways show how huge the original plan was, but also what was retained.

Every picture in The Art of NASA tells a special story. This collection of the rarest of the rare is not only a unique view of NASA history—it’s a fascinating look at the art of illustration and a glimpse of NASA history like no other.

Piers Bizony is an experienced multimedia professional who has written about science and the history of technology for a wide variety of publishers worldwide, and has undertaken major projects for the media departments at NASA and ESA. He has also gained substantial experience within the film and television industries. The author of Quarto’s Moonshots, The Art of NASA, NASA Space Shuttle: 40th Anniversary, and other titles, Bizony also worked closely with the family of Stanley Kubrick, in conjunction with Warner Bros. and fine art publishers Taschen, on a large-format book about the making of 2001: A Space Odyssey.