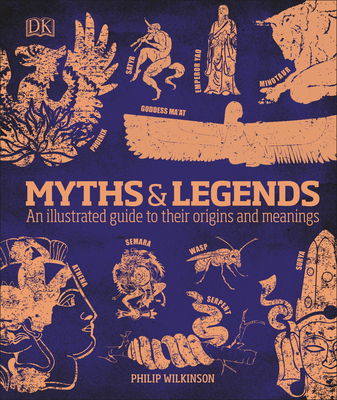 Myths and legends are deeply rooted in the world’s literature, language, and history. But what does the phrase "Achilles heel" refer to, and what did Oedipus or Beowulf actually do?

Gather round for enthralling stories of gods, danger, heroes, and great cosmic events. With over 1000 illustrations, Myths and Legends explores epic global stories, bringing to life the greatest creation myths of all time, such as that of Brahma and Vishnu, and the Inca god Viracocha. It brings you monstrous creatures and terrifying people including the witch Baba Yaga, as well as epic adventures such as King Arthur’s search for the Holy Grail and Jason’s capture of the Golden Fleece.

It tells how the Masai first got their cattle, or how the Greeks discovered fire and shares legends that explain death, including the story of the Maori god Tane.

Originally passed down from one generation to the next, these sagas from all over the world are part of our heritage and touch our hearts. Myths and Legends provides context and meaning to each one, and is a treasure trove for everyone interested in their cultural legacy.

Philip Wilkinson has more than 50 titles to his credit in the fields of history, mythology, and the arts, including DK's Illustrated Dictionaries of Mythology and Religions and DK's Eyewitness Companion: Mythology, as well as A Celebration of Customs and Rituals of the World, which was endorsed by the United Nations.