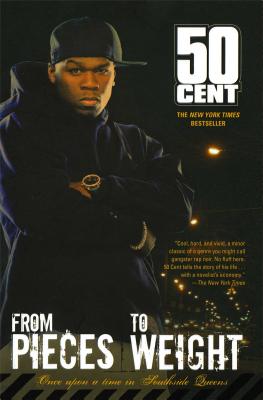 In the New York Times bestseller From Pieces to Weight, rap mogul 50 Cent, a.k.a. Curtis Jackson, lifts the veil on his complicated life, from the murder of his mother when he was twelve, to hustling on the streets; from the assassination attempt that nearly finished him to his meteoric rise to the top of hip hop royalty.

This violent and introspective memoir reveals not only 50 Cent's story but also the story of a generation of youth faced with hard choices and very few options. It is a tale of sacrifice, transformation, and redemption, but also one of hope, determination, and the power of self. Told in 50's unique voice, the narrative drips with the raw insight, street wisdom, and his struggle to survive at all costs—and behold the riches of the American Dream.

50 Cent (a.k.a. Curtis Jackson) is a record-breaking rap recording artist, entrepreneur, music producer, and actor. His debut album, Get Rich or Die Tryin’, sold more than 12 million units worldwide, is certified eight times platinum, and was the basis for the semi-autobiographical film of the same title, in which he starred. He is the first artist to have four songs in the top ten of Billboard’s Hot 100 since the Beatles in 1964. He published his memoir, the New York Times bestseller From Pieces to Weight, which was hailed as “cool, hard, and vivid, a minor classic of gangster rap noir” (The New York Times). He is also the author of Hustle Harder, Hustle Smarter. Under the G-Unit brand, his business empire includes a record label, apparel and footwear ventures, vitamin water, and more. He created the nonprofit organization The G-Unity Foundation, which aims to better the life of urban youth. Follow him on Twitter and Instagram at @50cent.

"Cool, hard, and vivid, a minor classic of a genre you might call gangster rap noir. No fluff here. 50 Cent tells the story of his life...with a novelist's economy."
-- The New York Times