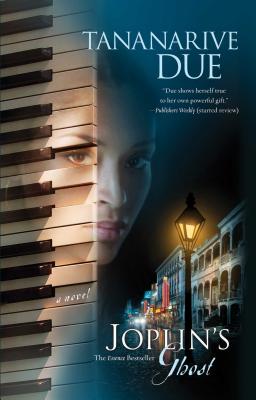 The life of Phoenix Smalls spins horrifically out of control as a long-dead music legend chooses her to continue his legacy, in this historical novel—part love story, part ghost story—from acclaimed horror novelist Tananarive Due.

The sound of Scott Joplin is strange enough to the ears of the hip-hop generation. But the idea that these antique sounds are being channeled through Phoenix? Her life is suddenly hanging in the balance. How will she find her true voice and calling? Can the power of her own inner song give Phoenix the strength to fight to live out her own future? Or will she be forever trapped in Scott Joplin's doomed, tragic past? Stunningly original, Joplin's Ghost is a novel filled with art and intrigue—and is sure to bring music to readers' ears.

Tananarive Due is an American Book Award-winning, Essence bestselling author of sixteen books, including the Blood Colony, The Living Blood, The Good House, Joplin’s Ghost, and Devil’s Wake. She was also a contributor to Jonathan Maberry’s middle grade anthology, Don’t Turn Out the Lights. She has won an American Book Award, an NAACP Image Award, and a British Fantasy Award. She teaches Black Horror and Afrofuturism at UCLA. She lives in Atlanta, Georgia. Visit her website TananariveDue.com.

"Due shows herself true to her own powerful gift." -- Publishers Weekly (starred review)

"[M]ore than just a ghost story is Due's sense of musical and cultural history.... Even while she brings to life Scott Joplin the man, Due makes us appreciate Scott Joplin the icon, the symbol. This understanding gives Joplin's Ghost its haunting power." -- The Washington Post

"In this ambitious and action-packed novel, Tananarive Due blurs genre boundaries as adroitly as her ghost walks through walls. Part love story, part ghost story, part historical fiction, part contemporary adult drama, this book is difficult to categorize -- and impossible to put down." -- Valerie Boyd, author of Wrapped in Rainbows:The Life of Zora Neale Hurston