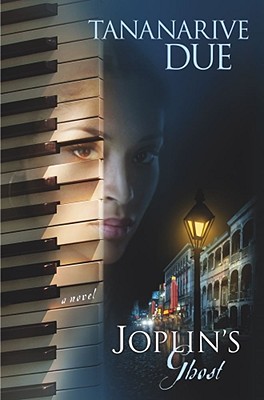 By Tananarive Due
$25.00
Email or call for price

From the award-winning writer of The Good House, The Living Blood, and more, Joplin's Ghost is a chilling tale of a star-in-the-making whose life goes haywire as she is haunted by the ghost of a long-dead music legend.

The music of Scott Joplin is strange enough to the ears of the hip-hop generation, but the idea that these antique sounds are being channeled by the protegee of rap superstar G-Ronn is nothing short of ludicrous.

With growing violence in G-Ronn's inner circle and a ghost bent on living forever through her, Phoenix's life suddenly hangs in the balance," writes Tananarive Due. Can the power of her own inner song and the love of a music writer who believes in her give Phoenix the strength to fight to live out her own future? Or will she be trapped forever in Scott Joplin's doomed, tragic past?

"In this ambitious and action-packed novel, Tananarive Due blurs genre boundaries as adroitly as her ghost walks through walls. Part love story, part ghost story, part historical fiction, part contemporary urban drama, this book is difficult to categorize -- and impossible to put down."

-- Valerie Boyd, author of Wrapped in Rainbows: The Life of Zora Neale Hurston