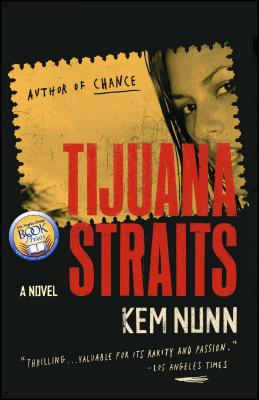 From Kem Nunn, the National Book Award-nominated author of Tapping the Source and The Dogs of Winter, comes an exquisitely written tale of loss and redemption. Nunn renders the dangerous beaches and waters of California's borderland as only the critically acclaimed poet laureate of surf noir can, and Tijuana Straits confirms his reputation as a master of suspense and a novelist of the first rank.

When Fahey, once a great surfer, now a reclusive ex-con, meets Magdalena, she is running from a pack of wild dogs along the ragged wasteland where California and Mexico meet the Pacific Ocean -- a spot once known to the men who rode its giant waves as the Tijuana Straits. Magdalena has barely survived an attack that forced her to flee Tijuana, and Fahey takes her in. That he is willing to do so runs contrary to his every instinct, for Fahey is done with the world, seeking little more than solitude from this all-but-forgotten corner of the Golden State. Nor is Fahey a stranger to the lawless ways of the border. He worries that in sheltering this woman he may not only be inviting further entanglements but may be placing them both at risk. In this, he is not wrong.

An environmental activist, Magdalena has become engaged in the struggle for the health and rights of the thousands of peasants streaming from Mexico's enervated heartland to work in the maquilladoras -- the foreign-owned factories that line her country's border, polluting its air and fouling its rivers. It is a risky contest. Danger can come from many directions, from government officials paid to preserve the status quo to thugs hired to intimidate reformers.

As Magdalena and Fahey become closer, Magdalena tries to discover who is out to get her, attempting to reconstruct the events that delivered her, battered and confused, into Fahey's strange yet oddly seductive world. She examines every lead, never guessing the truth. For into this no-man's-land between two countries comes a trio of killers led by Armando Santoya, a man beset by personal tragedy, an aberration born of the very conditions Magdalena has dedicated her life to fight against, yet who in the throes of his own drug-fueled confusions has marked her for death. And so will Fahey be put to the test, in a final duel on the beaches of his Tijuana Straits.

Kem Nunn is a third-generation Californian whose previous novels include The Dogs of Winter, Pomona Queen, Unassigned Territory, and Tapping the Source, which was made in to the film Point Break. Tijuana Straits won the Los Angeles Times Book Award. He lives in Southern California, where he also writes screenplays for television and film.

Robert Stone Kem Nunn is an accomplished storyteller and a first-rate writer. In Tijuana Straits he has sounded depths that are all too real; his quietly lyrical, terrifying, and utterly absorbing novel is a classic examination of people clinging to one of the world's most potent frontiers, the darkly promising, often treacherous intersection of Mexico, California, and the Pacific Ocean. Nunn knows the subcultures and strategies through which people there survive and he has wrought a harrowing and moving story of unforgettable characters living, literally, on the edges.

"Thrilling...valuable for its rarity and passion."
-- Los Angeles Times

"Tijuana Straits is a dark, troubling ride. If you surrender to it, it will carry you deep into the night."
-- The San Diego Union-Tribune